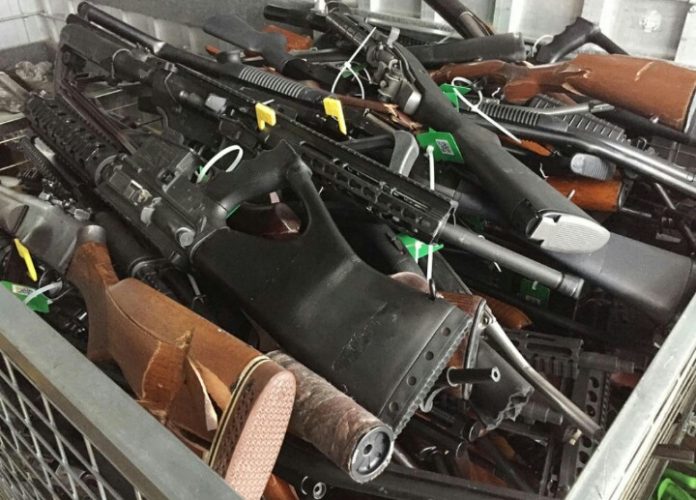 Muslim rebels in the mainly Catholic Philippines began handing over their guns to independent foreign monitors Saturday, as part of a peace treaty aimed at ending a decades-long separatist insurgency that has left about 150,000 people dead.

But the disarmament will take time to make an impact in a place where violence is an almost daily threat.
A bomb hidden in a parked motorcycle exploded near a public market in Isulan town early on Saturday, just hours before President Rodrigo Duterte was to witness the decommissioning ceremony some 40 kilometres (25 miles) away in Sultan Kudarat.

Police said eight people were injured in the attack that was later claimed by the Islamic State group, according to the SITE Intelligence Group.

The decommissioning process “should not lead to expectations that it is going to result in a major deceleration in attacks”, said Francisco Lara, senior conflict adviser for Asia at watchdog group International Alert, noting that the general public in the region are also armed.

Each retired fighter will receive a million pesos’ (about USD 19,000) worth of cash, scholarships, health insurance, and training to become productive civilians.
Rebels facing criminal cases related to the insurgency will be granted amnesty, while those qualified can train to become a soldier or a police officer, Duterte’s peace adviser Carlito Galvez told reporters.

“In order to have an enduring peace, we have to change the mindset of the people,” he said.

“The war will resume if the government reneges on what it promised us,” said the 66-year-old, who said she dropped out of a Catholic-run high school and became a rebel courier and cook in 1969 after soldiers killed several of her cousins.

The second phase of decommissioning involving the main bulk of fighters kicks in next year, with the rest to undergo the process before 2022.
(AFP inputs)