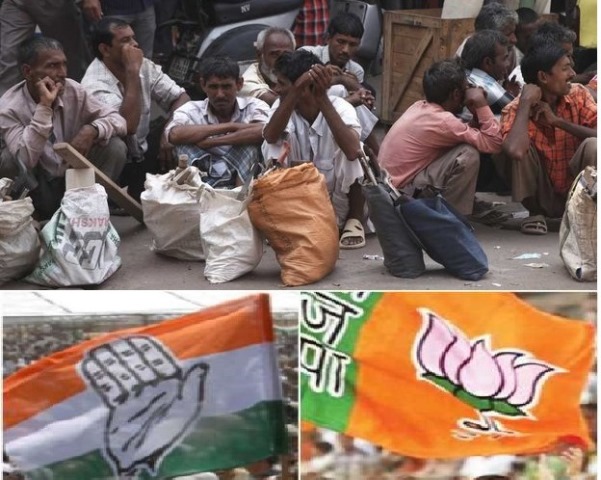 Nowadays, political parties are busy in election campaign and they are raising different type of issues related to the country and its citizens. Also, each party is trying to prove itself to be the best party, ensuring that it will solve all those problems of Indian citizens which were not yet solved, even after 70 years of Indian Independence. Sometimes, they criticize each other and their policies too. This election will decide the future of India for next 5 years. If we go through the statements the candidates are delivering during their campaigns, we only find that they are doing their best to create emotional environment and criticize other political parties and their agendas as well. No political party seems to be talking about the genuine issues of the citizens and especially the youths, the challenges related to secular and democratic nature of India and problems related to eradicate communal outfits in order to create peaceful environment in the prevalent threatening situation of the country.

In addition to this, they are striving to make themselves ‘super’ and ‘swiper’, showing that they only want to win the election and come into power, so that they can fulfill their political purposes and   benefits. If this drama of making nonsense doesn’t not stop, the people of India will continue to face those problems which they have been facing since the British colonialism long before the Indian independence. Neither any political party thinks to add real issues of citizens in its manifesto nor wants to raise these issues in political campaign. Moreover even our elected representatives do not potentially raise these issues before the government in parliament. If it had been taken seriously, many of the existing problems would have been solved. But unfortunately, the dream of a beautiful India still remains to be unfulfilled. Now the question is what are our genuine issues and challenges before democracy? And who will solve these problems?

It is one of the potential issues of the day mainly related to youths of the country. Our elders are also expressing their anxiety about it but there is no solution for it till now. The youths are searching jobs but they are not getting jobs. It is not because they do not have talent or skill. No. Never, But because there is actually lack of job opportunities in the country. Though vacancies are there in different sectors and industries, the youths are not being provided with opportunities. The promise made by Modi -led BJP in 2014 to provide 2 crore jobs per year still remains to be like ‘sarab’. This unemployment has led many youths to commit suicide and day by day the rate of unemployment is increasing, threatening to the future of many other youths and breeding different kinds of socio-economic problems. If the govt. does not focus on this potential issue and take it seriously to solve it, then who will?

It is said that right to vote has no meaning for a hungry person. For him /her the first requirement is food and fulfillment of basic needs of life. Therefore, poverty is considered as the greatest issue of democracy. It is, in fact, the root cause of all kinds of deprivations and inequalities. Because of poverty, a man is not able to live a healthy life but he lives a miserable life and doesn’t get real happiness of life. The poor do not have big dream like rich but they do not have even something to fulfill the basic needs of life. We do not see glimpse of happiness on their faces and this poverty breaks them more older than their real age just because of not having proper and healthy foods.

This is a problem which India inherited from the exploitative British colonial rule and it continues to be one of the gravest problems even today. India has got freedom to eradicate such problem but even after the 72 years of independence, 21.9 % population of India are still under below poverty line and live a fragile economic life as per the Suresh Tendulkar Committee. India had got freedom to see happiness on the face of their citizens as it belongs to them all equally but still is waiting to see real happiness on the face of each and every citizen.

Right to freedom was guaranteed as fundamental right under constitution of India in part III but are we free to express our views to criticize the policies of government? The answer is negative. If someone criticizes the wrong policies of the ruling government, he or she is labeled as anti BJP, anti-government, anti Modi and even anti-national. It means even if we are guaranteed right to freedom of expression as fundamental right but neither we can express our views in adequate manner nor can criticize the policies of government. In such condition, what is the meaning of federal form of the Government and parliamentary form of the Government? And what is the use of such freedom?  The government is interfering in judicial system and not only this, it is also using other governmental bodies and media for its political purposes and this is one of the biggest challenges of the day before a strong democracy of India. So it is the need of the hour to strengthen the freedom which was guaranteed under article from 19 to 22 of Indian Constitution.

In the last five years the increasing level of mob lynching, communal violence, heat and hatred has also created a certain kind of atmosphere. The people are feeling unsafe and facing insecurity within the territory of India as the communal violence has been taking place in each and every parts of the  country. The communal minds are very active and the government is not taking strict action against communal fabrics to stop the atmosphere of fear, heat and hatred in order to spread peaceful environment for harmonious life and to save our “unity in diversity” and to protect our old age cultural heritage.

We should not forget that our forefathers and freedom fighters did not sacrifice their valuable life for such days and such unsafe environment to live.  They gave sacrifice of their lives so that our next generation can live and move freely throughout the country wherever they want. Those who try to create communal atmosphere in the country, they actually hurt the soul of our freedom fighters and want to break down our strongest cultural heritage of multi language and multi religious acceptance.

Right to education has been granted as one of the fundamental rights under article 21A of Indian Constitution. And the child labour was prohibited under article 24 as it clearly states that “no child below the age of 14 years shall be employed to work in any factory or mine or implied in any hazardous employment”. The reason behind it is that the child labour is a hazard to a child’s mental, physical, social, educational, emotional, and spiritual development. But whether this prohibition was implemented in the country, we all are well aware of this fact .we also know what the condition of educational institutions in the country is and what the level of education in these institutions is. We believe that the education is the backbone of our social, cultural and economic development. Without education the development is not possible but no political party is raising such potential issue to improve educational systems and prevalent condition of Universities and colleges as well. There is a need to impart knowledge among children. And Robert Ingersoll nicely said “give every human being every right that you claim for yourself”.  We should also not forget the word of William Wordsworth         “child is the father of man”.  If children will not get education today, imagine who will lead us in future? And what will be the future of India?

Apart from these, water scarcity, environment problem, health issue, women security, privatization of education and economic sectors as well, are some other notable issues.

The parties that are making promises today to fulfill our demands, if they will really keep their words tomorrow or are just showing the dream like ‘Sarab’ as BJP has done to us in the last five years. We will have to see this but before that if we want freedom of expression, safety and security within the territory of India, peaceful environment, happiness on every face of Indian citizen ,more governance and less government, equality and Justice with all, and if we want to protect “our unity in diversity”, our old age cultural heritage and to see bright future of India as well as glorious future of its citizens, then we must use our right to vote in a proper manner thinking that it is only our votes which are going to decide the future of India.