New Delhi: The announcement by opposition parties on Monday of bearing the rail fare of thousands of stranded migrant workers heading towards hometowns has put the Modi government to shame. Congress president Sonia Gandhi said that the party will bear the cost of migrant workers’ rail tickets while Rashtriya Janata Dal (RJD) leader Tejashwi Yadav also announced to pay the fare of stranded migrants in 50 trains to bring them back. This forced the BJP government at the center that it would bear 85% of the rail fare of labourers headed home, while the states will contribute rest 15%. 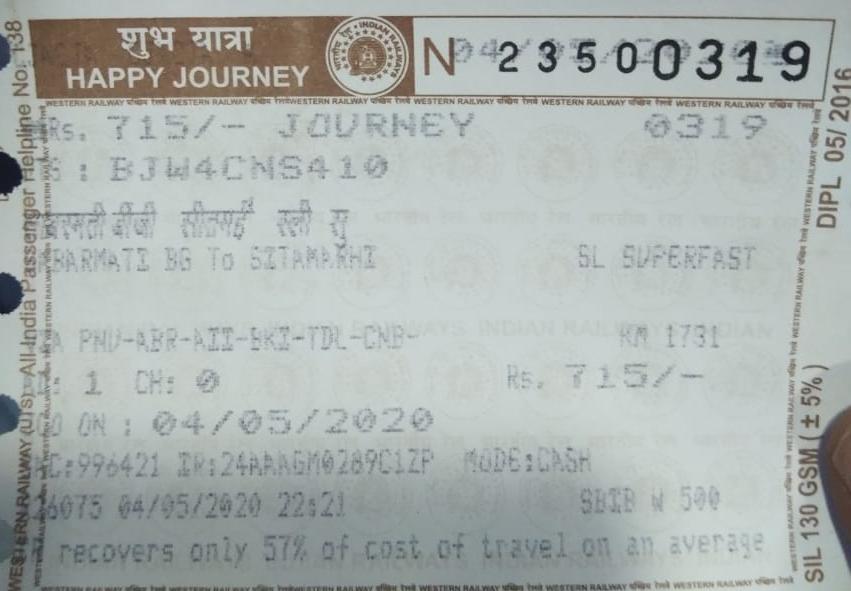 Emphasising on the plight of migrants and the money being charged from them for ferrying them back to their homes, Sonia Gandhi said in a statement, that the workers and labourers form the “backbone” of the economy and their hard work and sacrifice are the foundation of the country.

She said that as the Modi government barely gave a four-hour notice of the lockdown, migrant labourers were denied the opportunity to return to their homes. Post the partition of 1947, this is the first time India witnessed a tragedy with such a massive human cost as thousands of migrant workers and labourers were forced to walk home several hundred kilometres on foot – without food, without medicines, without money, without transportation, without anything except for the desire to return to their families and loved ones.

“The very thought of their plight is enough to break our hearts as there was also the outpouring of support from fellow Indians for their inspiring resolve,” she said.

Attacking the center, she said, “What is the responsibility of our government? Even today, lakhs of workers and migrant labourers are languishing in different parts of the country and wish to return to their homes and families but there is neither adequate money nor provision for free transport.”

She underlined that when the government could recognise its responsibility by arranging free air travel for citizens stranded abroad, when the government could spend nearly Rs 100 crore on transport and food, etc. for just one public programme (Trump visit) in Gujarat, when the Rail Ministry has the largesse to donate Rs 151 crore to the PM’s corona fund, then why can’t these essential members of the nation’s fabric be given a fraction of the same courtesy, especially free rail travel, at this hour of acute distress?

What is particularly disturbing is that the Central government and the rail ministry are charging them for train tickets in this hour of crisis,” she said.

“The Congress has, therefore, taken a decision that every Pradesh Congress Committee (state unit) shall bear the cost for the rail travel of every needy worker and migrant labourer and shall take necessary steps in this regard.”

“This will be the Congress’ humble contribution in service of our compatriots and to stand shoulder to shoulder in solidarity with them,” she said.

Her remarks came amid the reports that the migrants were being charged for their travel by trains to their respective states.

Taking a cue from the Congress chief, RJD leader Tejashwi Yadav, who is also Leader of Opposition in the Bihar Legislative Assembly, said the party would pay the fare of stranded migrants to bring them back. Earlier, he had offered to provide 2,000 buses to the government for the purpose.

RJD, which is a constituent of the United Progressive Alliance (UPA), also targeted the ruling Nitish Kumar government.

In a series of tweets in Hindi, Yadav said, “The 15-year-old double engine government is giving excuses for not bringing the migrant Bihari labourers… Only around 3,500 people are able to come through three trains in the 5-day duration… It gives excuses on the pretext of fares, resources and rules. The Nitish government’s intention is not to bring back the migrants.

The center has not issued any official notification yet regarding the free travel for migrant workers.

“We urge upon the Railway Minister to withdraw the order and to ensure that the travel is made free otherwise Congress Party’s units are more than willing to ensure that every needy migrant worker and labourer goes home and the necessary arrangements shall be made.”

In response to a question about the silence of PM and Railways Minister on the issue, where as the Railways Board Chairman, BJP Spokesperson giving conflicting statements and another BJP MP saying that the Union Government would bear 85 per cent cost? Venugopal said the Congress does want to play politics on these things.

“We know, in Karnataka what happened, those who have no money, they are not able to travel the special trains, that is why our Karnataka PCC under the instructions of AICC has given Rs. one crore cheque to the Chief Secretary of Karnataka,” he added.

They urged the PM Modi to leave the false prestige and to utilise thousands and thousands of crores lying in the PM Corona CARE fund. “If this amount cannot be utilised for our migrant workers and labourers, then for what, this amount is going to be utilised for? Will the Prime Minister tell the nation?” They asked

The railways has earlier said that it was charging the state governments for the Shramik special train tickets which has started to run the Shramik Special trains for transporting the labourers from May 1, almost 40 days after the passenger, mail and Express trains services were suspended.