New Delhi: Jamiat Ulama-i-Hind (JUH) led by  Maulana Mahmood Madani has come under fire from different quarters including its rival faction for issuing Halal certificate to  Yoga guru Ramdev’s  Patanjali group. The Muslim circles alleged that a hefty sum of money might have changed the hands for issuing Halal certificate to the Patanjali group which, they suspect, uses cow urine in making its products. By this act, they also alleged that the Mahmood faction has extended indirect help to Ramdev  who is known for his pro-government and pro-RSS stances. However, Jamiat Ulama-i-Hind Halal Trust (JUHHT), which issued the certificate, tried to clarify its position by stating that no cow urine product was given certificate and asserted that it has a very strong and robust Halal Audit system.

The social media is also awash with sharp comments on the issuance of the Halal certificate while alleging that both the factions of JUH often go against the interest of the community. Social media users referred to  the meeting of Arshad Madani with RSS chief and Mahmood Madani’s unflinching support to the Modi government to buttress their point.  Ramdev is known “Muslim-baiter” and virtually a part of the ruling party. By issuing a Hall certificate, the JHU has given an effective instrument to promote Patanjali products in Islamic world particularly in the Middle East and thereby financially strengthening the hands of saffron groups who are spewing venom against the country’s second largest religious group.

Even, JUH faction led by Maulana Arshad Madani, which generally stays away from the affairs of its rival faction, also criticized the decision while disclosing that the Patanjali group had first approached to them for the Halal certification.

After the vertical division in the 100-year old organization in 2007, Arshad Madani faction has rechristened it Jamiat Ulama-i-Hind Halal Committee as Jamiat Ulama-i-Hind Halal Foundation (JUHHF).  JUHHF functionary Maulana Gulzar Azami disclosed that, “they (Patanjali group) first approached to us and pleaded their case for a month but we refused as we knew all their affairs”. Consequently, they (Patanjali) went to Mahmood group’s Halal trust, whose proximity with the Modi government is not a secret, Maulana Azami said and alleging that the Mahmood faction has gone wayward after it broke away from us and needs to be exposed.

Social Democratic party of India leader, Dr Taslim Rehmani, who first raised the issue, said Ramdev openly flaunts the use of cow urine in its products and adding that there are many video clips of Ramdev  available on YouTube platform  lecturing the benefits of cow urine. We asked the secretary of the Jamiat Halal trust, Niaz Ahmad Farooqui to make public the list of products which were given Halal certification but he did not provide this, said Dr Rehmani. It creates suspicion about the deal., he added.

Voicing  similar concerns ,  Maulana Aamir Rashadi, president  Rashtirya Ulema Council,  said  the Jamait Trust people should fear of the Almighty Allah as  the promoter of the Patanjali company openly  maintains  that  his company purifies all products by using cow-urine. He alleged it might have been a sweetheart deal as Mahmood group is known for hobnobbing with the powers that be. 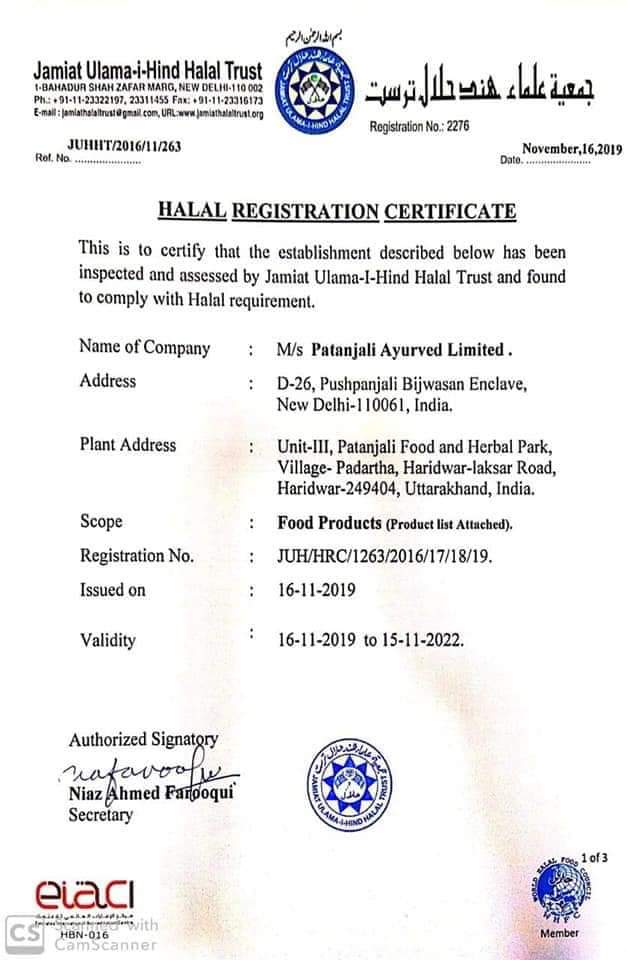 It is to recall that some years back, a Muslim group from Tamil Nadu,  Thowheed Jamat had alleged that cow’s urine was being used as a ‘key ingredient’ in cosmetics, medicines and food products of Patanjali that are available in open markets as well as online. The Jamat said the cow urine’s usage was considered ‘haram’ (forbidden) in Islam.

Patanjali group was established in January 2006 and since the advent the Modi government in May 2014, its fortunes rose to phenomenal levels which is now aiming at ₹25,000 crore revenue this fiscal year.  To achieve this target, the company needs to establish foothold in the lucrative oil-rich gulf countries, for this purpose Halal certificate is must.

Jamiat Halal trust flaunts on its website that “its unique services help companies penetrate in the global economy and establish themselves as a trusted brand for consumers.

However, debunking the claim of Farooqui, Dr Sultan Ahmad, scientist, said the Jamiat has no scientific method to ascertain which products contains cow urine. He said Ramdev and his company is vocal promoter of cow urine that creates suspicion in Halal consumer’s mind.

Meanwhile, All India Halal Board also voiced its concern on the issuance of the certificate. Board general secretary, Danish Reyaz  said  ‘we are collecting  all necessary documents  to expose them (Jamiat  Halal Trust) at the forthcoming  World Halal Conference which  will be held in Malaysia in September this year.