“Democracy dies in darkness,” said Padma Kuppa in March 2020. “The minute you stop paying attention and stop being aware of what’s going on, you let other people take over things that impact your daily life.”

Kuppa, who was elected to the Michigan State House of Representatives in 2018, is seeking a second term. As she does, few voters in the suburban region of Detroit that she represents are aware that some of her largest campaign donations come from out-of-state donors who are executives in affiliates of India’s Rashtriya Swayamsevak Sangh (RSS). Even less of the voters in her district have the slightest awareness of the extent to which RSS affiliates in America directly — and negatively — impact the daily lives of citizens in India, particularly religious minorities.

“A lot of South Asians don’t see politics as a ‘clean’ thing,” Kuppa said in April 2019 as she hit the fundraising circuit mere months after first taking office. “Money is needed (to win office). There’s nothing dirty about money — it should just be transparent.”

For the sake of transparency, it should be noted that $4400 of Kuppa’s campaign donations in 2020 came from the Bhutada family. Based in Houston, Texas, the family is headed by Ramesh Bhutada, who is the vice-president of the Hindu Swayamsevak Sangh — the international wing of the RSS. Bhutada is also a key organizer for the Overseas Friends of the BJP (OFBJP), the international wing of India’s ruling Hindu nationalist Bharatiya Janata Party.

In September 2019, the Bhutadas were instrumental in organizing “Howdy, Modi,” a mega-reception in Houston for BJP Prime Minister Narendra Modi. Kuppa not only joined the event, but led a post-reception panel discussion. Meanwhile, outside the venue, thousands of Indian-Americans and others protested throughout the day, chanting “Modi, Modi, you can’t hide, you committed genocide” in reference to the controversial politician’s role in an anti-Muslim pogrom in Gujarat, India in 2002.

From 2005 to 2014, when Modi became Prime Minister of India and gained diplomatic immunity, he was banned from entering the US under a law prohibiting foreign officials who are “responsible for or directly carried out, at any time, particularly severe violations of religious freedom.” In the months before Modi was elected in May 2014, the Hindu American Foundation — of which Kuppa was a board-member — was actively lobbying on Capitol Hill to, in the words of one staffer, “undermine anyone in Washington who is critical of Modi.”

At the same time, Bhutada was organizing OFBJP phone-banks in Houston to call Indians and urge them to vote for the BJP as well as fielding teams of volunteers to physically travel to India and serve as boots on the ground to support Modi’s election.

Among those who traveled to India was Vijay Pallod, Bhutada’s cousin-in-law and fellow activist. Pallod, like Bhutada, is a frequent donor to the campaigns of US politicians perceived as sympathetic to Modi, the BJP, and the RSS. Despite living in Texas, he has donated $200 in the 2020 election cycle to Kuppa’s campaign in Michigan.

Are such donations prompted by Kuppa’s past apologetics for Modi?

In August 2014, just as the head of the BJP’s Foreign Affairs Cell launched a 12-day tour of the US to promote Modi’s first mega-reception at Madison Square Garden in New York City, Kuppa complained, “Reporting on India has focused primarily on the 2002 violence against Muslims in Gujarat — making it the centerpiece of any story on India or its newly elected prime minister, Narendra Modi.” Despite on-camera confessions by BJP Gujarat state legislators who participated in the violence and fingered Modi as authorizing it — saying “he had given us three days to do whatever we could” — Kuppa denounced “efforts to implicate then-newly elected Gujarat Chief Minister Narendra Modi” and, parroting a typical RSS talking point, argued that “he was acquitted of having been responsible for the riots in 2012.”

The reality is that a Special Investigation Team (SIT) appointed by the Supreme Court reported that there was “not enough evidence” to prosecute Modi — a finding that, as social activist Harsh Mander notes, is “at best a technical clearance in the absence of cast-iron evidence that he actively or explicitly directed the carnage.”

Is that why she has received donations this year from people like Subhash Gupta (President of HSS-Houston) and Nainan Desai (President of HSS-Tampa)? The RSS, according to the writings of its first two leaders — KB Hedgewar and MS Golwalkar — seeks to create a “Hindustan of Hindus” and views non-Hindus like Christians and Muslims as “internal threats” and “foreign races” who must either be “fused into the Hindu way of life” or else be stripped of citizenship rights. The RSS adheres to an ideology known as “Hindutva,” which, as Amnesty International reported in 2005, “is the political ideology of an exclusively Hindu nation.”

In line with the RSS’s goal of fashioning India into an exclusively Hindu nation, Kuppa supports “anti-conversion” laws passed by various governments in multiple states — including Gujarat — and proposed nationally by BJP leadership. Comparing the sharing of one’s religion to “sexual harassment and school bullying,” she writes, “When India sought to defend against unethical tactics by passing its Anti-Fraudulent Conversion Laws, it came under fire. Americans reacted by placing India on the annual Watch List of the United States Commission on International Religious Freedom (USCIRF).”

The various laws — which typically require that people who choose to switch from one religion to another either notify the government or actually receive permission from the government to do so — are framed as supposed attempts to prevent “fraudulent” or “forced” conversions. Yet, according to the USCIRF, “While the laws purportedly protect religious minorities from forced conversions, they are one-sided, only concerned about conversions away from Hinduism but not towards Hinduism. Observers note that these laws create a hostile, and on occasion violent, environment for religious minority communities because they do not require any evidence to support accusations of wrongdoing.”

However, the BJP — which is essentially the political wing of the RSS — has proposed passing national “anti-conversion” legislation. Perhaps Kuppa’s justification for laws criminalizing freedom of religion in India is the reason that top OFBJP leaders have donated to her campaign. OFBJP National Councillors like Atri Macherla and Sudhir Shah as well as former president Ramesh Shah — none of whom live in Michigan — have donated generously.

“The reality of Hindu majority India is that there is poverty, years of oppression to contend with and a constant onslaught from evangelicals,” writes Kuppa. “Faced with aggressive conversion tactics, some Hindus may become intolerant or defensive, but that is no reason to exclude all Hindus from the conversation.”

Her rhetoric mirrors the standard RSS justification offered for an anti-Christian pogrom in Odisha, India in 2008. 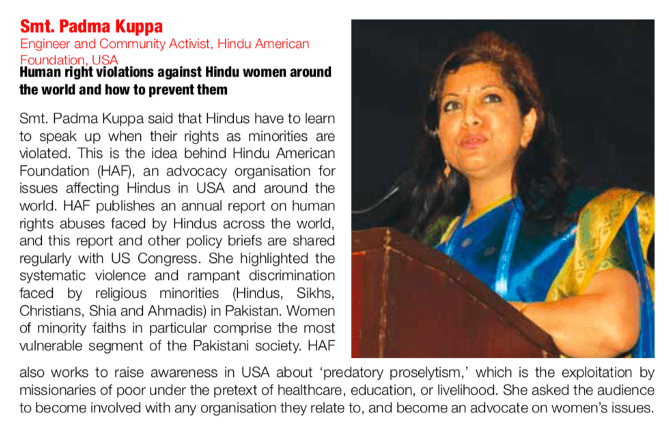 In August 2008, a prominent activist of the Vishwa Hindu Parishad (VHP) — the religious wing of the RSS — was assassinated in Odisha, a state with one of the oldest “anti-conversion” laws in the country. He was known for “working against conversion of tribals into Christianity.” Although Maoist insurgents claimed responsibility for his murder, the RSS and its affiliates blamed Christians. Over a period of several weeks, they launched a pogrom against Christians, massacring approximately 100, displacing tens of thousands, and burning their homes and churches. The following year, the state’s chief minister reported, “Members of RSS, VHP and Bajrang Dal [the VHP’s youth wing] were involved in the violence that took place last year.”

In 2018, the year that Kuppa was first elected, the Central Intelligence Agency declared the VHP a “religious militant organization.” Four years before that, Kuppa was in New Delhi to speak at the World Hindu Congress, an event organized by the VHP and featuring keynote speeches from people like RSS chief Mohan Bhagwat and VHP chief Ashok Singhal. Singhal — who once described the 2002 Gujarat Pogrom as a “successful experiment which will be repeated all over the country” — spoke about Modi’s rise to power, declaring: “Proud Hindus have finally come to rule Delhi.… It’s time to create a Hindu superpower in the world.”

A featured speaker herself, Kuppa spoke about how “Hindus have to learn to speak up when their rights as minorities are violated.” Her presence at the Hindu nationalist conclave in India was unsurprising considering Kuppa is a long-time associate of and organizer for the VHP of America (VHPA). Perhaps that explains why Gaurang Vaishnav — a former VHPA General Secretary who is currently on the group’s Governing Council — donated to the Michigan politican’s campaign in 2018 desite the fact that he lives in New Jersey.

As Padma Kuppa has correctly noted, democracy dies in darkness. Not only the money that fuels political campaigns but also the affiliations of political candidates must be transparent. As she campaigns for re-election on a progressive platform — and, no doubt, harbors ambitions for higher office in the future — she deserves to be questioned about why she is carrying water for a xenophobic and genocidal religious nationalist movement in India.

This article was first published in Medium.com.

One thought on “Padma Kuppa: Hindutva’s propagandist in Michigan”