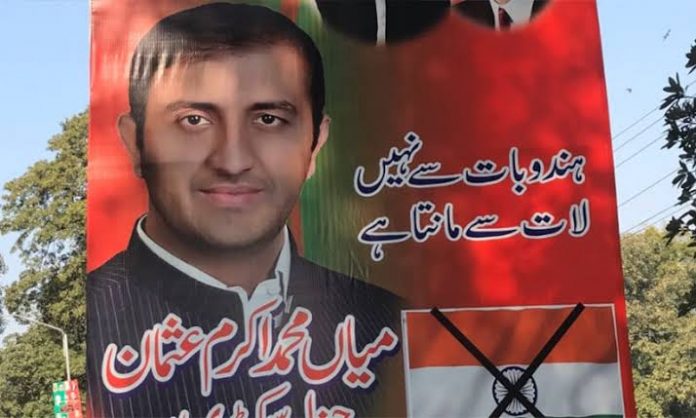 Lahore, Feb 7 A Lahore-based leader of the ruling Pakistan Tehreek-i-Insaf has issued an apology after he came under fire on social media for putting up banners that contained text deemed offensive to Hindus, a media report said.

The banners featuring the image of Akram Usman, the Lahore General Secretary, Prime Minister Imran Khan and Muhammad Ali Jinnah were put were up in connection with ”Kashmir Solidarity Day”, which was observed across Pakistan on Wednesday, the Dawn news report said.

After coming under criticism on social media, Usman took to Twitter to apologise to “all peacefully living ”Hindus” (on) both sides of the border”.

Usman told Dawn news that he had asked to prepare posters in connection with Kashmir day which should have text “critical” of Indian Prime Minister Narendra Modi.

But he was “misunderstood” and the word “Modi was replaced with Hindu” on the banners, the office-bearer claimed.

Later, while responding to a Twitter user, Usman said the posters had been removed “immediately” after they came to his notice.

On Thursday, Human Rights Minister Shireen Mazari said the General Secretary had been “reprimanded and posters were taken off immediately”.

She termed it “a shameful and ignorant approach by the individual”.

In March last year, ”s Fayyazul Hassan Chohan was removed as the Punjab Information and Culture Minister amid intense criticism over his derogatory remarks against the Hindu community.

However, he returned to the Punjab cabinet four months later.