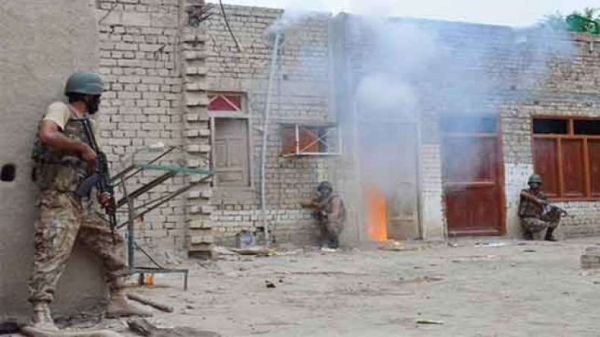 Islamabad, Dec 12 : At least 488 soldiers and 3,400 militants have been killed in the ongoing armed offensive by the Pakistani army in the country’s northwest tribal area over the last 18 months, the Inter-Services Public Relations, the military’s media wing, said in a statement here on Saturday.

Major General ISPR, Asim Bajwa, said that at least 1914 security personnel including officials and men from the Pakistani army and paramilitary troopers were injured in the operation.

He said that the military has also destroyed 837 hideouts of the militants from where they were carrying out terrorist activities.

Aiming at the eradication of local and foreign militants from the volatile North Waziristan agency, the armed offensive called “Zarb-e-Azb” was launched on June 15 last year.

Bajwa said that during the last 18 months phenomenal success has been achieved by the army which was currently busy in clearing the last pockets of terrorists close to the Pakistan-Afghanistan border.

He maintained that the terrorists’ backbone has been broken in the operation and their main infrastructure has been dismantled.

He said that the nexus of the Taliban militants with sleeper cells has been largely disrupted while intelligence-based operations were going on in the country to bust the remaining cells.

The DG ISPR said that an overall improvement in the law and order situation and security across the country is the fruit of the operation.

Festivities and national events, which were being repeatedly cancelled over the last few years due to the poor law and order situation and threats by the Taliban, were held in 2014 and 2015 as the successful operation has weakened the Taliban.

“Support of the entire nation for its valiant armed forces and resolve expressed against terrorism post December 16 Army Public School attack (in Peshawar) had been the bedrock of Operation Zarb-e-Azb,” he said.—IANS