Bravo Mr Prime Minister! Once again you have proven that you are the bravest face of Indian nationalism and the greatest Chanakya that was ever born in India. Before the UP election, there was an attack on our Air Force base in the Uri sector, you very appropriately and gallantly went for a surgical strike and as a reward swept the UP pole.Entire media saluted you and your heroism with Vande Mataram except a few devils and anti-nationals, rather Pakistani agents, who were foolish enough to ask you for the evidence of the surgical strike and the loss of the life and arsenal of the enemy across the border. You , then , did the right thing by letting lose your barking dogs to suppress their mew . Now when all the anti-national and non-patriotic lndian political opposition parties led by Congress were ganging up against your pro-India, pro-poor, pro-farmers , pro-Dalit, pro-OBCs and pro-development and anti- super rich policies, and because of that an ominous defeat in the forthcoming coming election was lurking over your head, your longtime friend from across the border came to your help.( I am saying so because some fools think that because of the pre-partition wrangling between Congress and the Muslim League of M. A. Jinnah , a RSS controlled government provides more justification for the creation of Pakistan than the Congress one). A young Kashmiri suicide bomber, with 250 kg RDX powder in his car was able to dodge our intelligence agencies on a route heavily monitored and militarised and was able to blow up a non-bulletproof bus into pieces and kill our 44 brave CRPF Jawans totally unguarded.

Many commoners, like me , were surprised and shocked to watch that our Prime Minister was not reacting the way we the Indians expect our PM to react and behave on such solemn occasions .You appeared not only very cool, calm and composed , but glowingly content and satisfied. An anti-national English newspaper from Kolkata published a series of your photographs of each day from 14th February onwards till 23rd or 24th of the month as its headline. In each of the pictures, you instead of glooming (looking gloomy) were blooming as if everything was going well and fit into your scheme of things.

And in the morning, came the great news, As tit for tat, India made a non- military air strike on the terror camps of Jaish e Mohammad in Bahawalpur / Balakote across the boarder /line and a squadron of Mirrage fighters dropped the 1000 kg bomb which destroyed their camps completely and almost wiped out 350 terrorists.

Sir, if you don’t mind, and if my patriotic credentials are not questioned, may I dare ask a question? When our internal or external intelligence agencies can’t provide us timely inputs in order to avoid the tragedies like Uri and Pulwama and Bombay attacks, how do you get such an accurate data of the loss of life and arsenals of the enemy across the border? Sir, I know I must not suspect them as Noora Kushti. That’s why I again have some questions. When, in the name of surgical strike, you sent a small group of our soldiers across the line and they went there silently, did their assigned job quietly and came back smartly, but when you ordered this time for an air strike, didn’t you fear that it may blow out into a full fledge war? Did you prepare the nation for this? Did you ask the administration to dig bunkers in important militarily strategic towns, in case of retaliatory air strike by the enemy? Did you order our army based in different camps to move towards the western border. Sir, I am not a man of military strategic studies, but my common sense tells me that such military ventures sometimes may boomerang upon us.

So sir, for whatever you have done, in whatever perspective and with whatever motives, You have silenced the enemy into complete numbness and dumbness, you deserve the highest national award of Bharat Ratna. May I request our Rashtrapatiji to immediately call an emergent joint session of the Parliament and confer upon our Prime Minister  “The Bharat Ratna Award”. He had proven twice that he has a 56” broad and brave chest. What else more our opposition parties want from him.

And a piece of advice to our opposition parties. They should stop dreaming of forming the government. They should accept the reality. They should write to the election commission to defer the election for another five years and let the RSS/BJP alliance rule the roost till all the national agenda is successfully achieved.BJP has very triumphantly played its trump card.All other political parties from the opposition have been dwarfed in the race for nationalism and patriotism.

The author is ex-president AMU Students Union. He can be reached at Email : smanwarhussain2009@gmail.com, Mobile: 9973002208 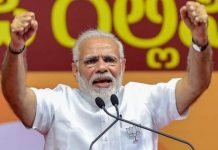 130 cr Indians have begun their journey towards ”vikas”: Modi 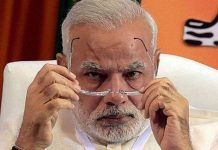