Vision International Academy in Phulat, district of  Muzaffarnagar (Uttar Pradesh) is a pioneering institution in the North India for Huffaz who want to pursue modern education. It is a unique project of Kerala-based Manappat Foundation launched with an aim to bring madrasa students into mainstream education.

The Academy’s sprawling building and campus is spread over three and half acres of land and in the midst of lush green mango orchards and in a serene surroundings. Our campus hasn’t yet developed fully. At present we are housing the students in the same building where we are engaging the classes, which is the academic block. The hostel block is building and it will take a few months for its completion, which has been designed to accommodate 320 students, along with wardens’ quarters, an auditorium and a gym. We will provide sports facilities as well.

The academy is just like a springboard for madrasa students to join modern education institutions after doing a crash course. It has developed such a course for madrasa students who would finish 10th class syllabus within two years. The crash course has been tailored to suit the fast-track learners. The Huffaz are put under constant supervision by way of regular practice and weekly test to ensure that they do not forget what they learn so quickly

After they pass 10th examination, the continue here for their 11th and 12th and they are also prepared for NEET and JEE so that they can get admission in medical and engineering courses.

In an exclusive chat with Muslim Mirror, Prof. Nasim Akhtar, who has taken the charge as director of the academy, says the task of shaping the future of Huffaz as a successful professional is no doubt challenging but at the same time enjoyable job, looking at the  zeal and enthusiasm of the students we are confident that  they won’t  fail us. We will get the desired results as their  memorizing capacity is amazing, Prof. Akhtar said.

Huffaz preparing to appear in competitive exams at VIA, Phulat Currently, there are 144 Huffaz studying in the academy who have been provided with lodging and boarding facilities by the Academy management as the campus has the state of the art facilities. It is a non-profit institution and it gives financial assistance to meritorious students who can’t afford the fees. The academy charges only Rs 75,000 as annual fee per student which includes tuition fees, food and lodging expenses.  Furthermore, round the clock safety of the students is ensured through a gated and guarded campus, said Prof Akhtar.

Asked what would be on his priority list as a new director, he said my immediate focus is on academics. “The students whom we are dealing with haven’t seen any books of English, maths, science, or social studies before. And they have to write their exams of 10th with state board, or CBSE in a span of just two year’s preparation. The general pattern of teaching method does not suit them at all. Therefore, the syllabus has to be revisited and the course contents have to be rewritten in order to make them suitable for fast-trackers, while no portion is missed out or the logical delivery is compromised with. This was no less a daunting task than the mission itself,” he opines.

The whole exercise is like putting old wine into a new bottle. It won’t be suitable if the wine so prepared was served in the old fashioned way. So, the methodology had to be changed as well, teachers were trained for that purpose.

We created a pacing guide which is a self-tracking system for both the students and the teachers, which is further accentuated by-weekly test of the portion taught over the week, the grades of which are recorded on a grid to help track the holistic progress of the students on a weekly basis, he added.

We hope that with the meticulous spirit of our students they will pass the 10th exam with good grades. After that they will take admission in 11th. We have started the process of hiring teachers and will prepare them for both, the 12th exam as well as the competitive exams, for engineering and medicine.  No stone is left unturned to make them combat ready for these challenges.

The main strategy lies in the time management. In a span of just one year we finish the course up to the 9th standard. We don’t teach them books. We teach them subject, which is done in a very strategic manner. In the first six months, we only teach them languages and maths. These subjects make their foundation strong, which enables them to understand a written content and write their own notes. Otherwise, they wouldn’t even be able to jot down anything from the board. Language forms the basis, maths encourages logical thinking. Once the ground is ready in six months, we push on to the other subjects which we have tailored for them. In the next six months we finish the contents of the syllabus up to class 9th, which they lap up quite comfortably, as their foundation was made strong.

Prof Akhtar outlines the next year plan saying it would be completely devoted to the study of class 10th materials and it would be very rigorous and methodical, too. The syllabus is covered in only 8 months’ time, and then follows the revision, with a daily test, the record of which is maintained on a holistic sheet for quick reference and remedial measures, if required.

“No doubt, we have some slow learners and some fail to keep pace with rest due to health or other personal reasons. For them we have an AICU (Academic Intensive Care Unit) a unique program where any such student is taken for a very limited time period for a quick ‘repair’ and sent back to his class”.

Once we make a mark with the success of our students at VIA, we will embark on the mission of proliferation of such schools in other parts of UP, and also other states like Bihar, Jharkhand, Bengal, Assam, etc, Prof Akhtar said. 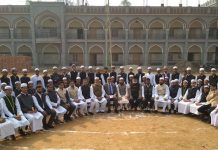 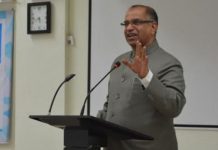 I want to repeat the Kerala model of Muslim empowerment in UP : Ameer Ahamed