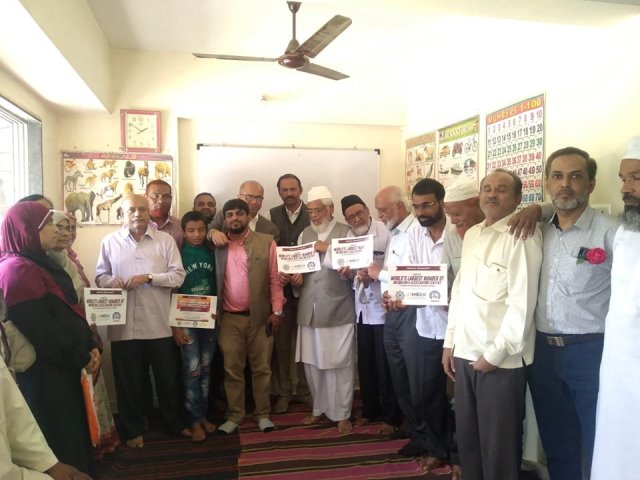 Speaking at the launch Altaf Pirjade, Chairman AIMBSN Incubation & Acceleration Centers said that “Based on the vision of our Government of India initiatives of Startup Standup India, Digital India, Skill India, Make In India, we would want all communities to participate in the Government of India initiatives and increase incomes through entrepreneurship by establishing startups and businesses”.

Legendary scholar, author, and community Anis Chishti Saheb said “That when we started TEWUM decades ago, our vision was for the upliftment of the community and country through education. With the launch of AIMBSN/ TEWUM, would help in the development of our country in the new economy”.

Kareem Attar, TEWUM Board member said: “A great initiative to increase entrepreneurship and overall development of our students. We are excited that we are launching AIMBSN/ TEWUM, the World’s Largest number of Incubation & Acceleration Centers”.

The AIMBSN/ TEWUM,  is part of the AIMBSN’s vision of establishing Incubators & accelerators at minority Institutions, where the startups, mentors, investors, and community can interact with each other to promote business and startups.

Indian American Chicago based Dr. Tausif Malik founder AIMBSN said that “AIMBSN/ TEWUM,  will inspire a generation of fearless young entrepreneurs who will thrive on innovation and build their ideas for the new and old economy.

In collective voice, the TEWUM team said that “We feel with the new initiative of AIMBSN/TEWUM Incubation & Acceleration Centers, our students while studying can participate in India’s Startup revolution by presenting their ideas to Board of Advisors and Experts for review, mentoring and funding. We would be applying for the Government of India promoted Atal Tinkering Labs & Atal Incubation CentersVenture capital”.

In February 2019  AIMBSN had launched  AIMBSN/IQRA, India’s 1st Muslim Minority School Incubation & Acceleration Center established in PCMC, Maharastra and the first POC was developed based on the business idea proposed by 12-year student Adam to establish a chain of bike repair stores.

AIMBSN is a very unique business networking event and the objective of the All India Muslim Business Startup Network (AIMBSN)  Conference is to create an entrepreneurial spirit and participation amongst the Indian Muslim community, so they can participate and contribute back to the economic activity of their motherland INDIA.

As India is emerging as the hottest startup destination in the World and Muslim community contribution is minuscule, hence All India Muslim Business Startup Network (AIMBSN) wants to create a platform for the Muslim community and connect them with economic and startup activity.