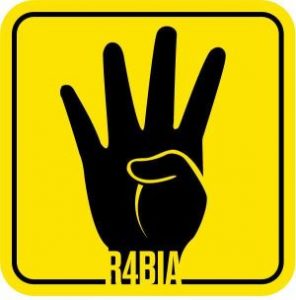 The ‘Rabaa’ sign showing four fingers has become a symbol of solidarity with thousands of those who were martyred in a field of Egypt near the historical Mosque called Rabia al Adawiya . This sign has also become a symbol of resistance and protest against the coup of military regime worldwide. The mosque suffered huge damage on August 14,2013 when the Egyptian police, military and their hired mercenaries made a bloody crackdown on the anti-coup peaceful protesters and finally the Police burnt and destroyed the mosque after the massacre.

A number of important funerals were conducted at the mosque, including that of Anwar Sadat, partially due to its proximity to the cemetery east of Cairo. The mosque site is adjacent to the Ministry of Defense building. The Rabia al Adawiya Mosque is one of the most famous mosques in Cairo located on the northern edge of Nasr City district in eastern Cairo. It was named after the 8th-century Sufi saint Rabia Al-Adawiya.

In July 2013, after the military and the old regime toppled the elected President Morsi, the mosque turned into sit-in camp for the thousands of supporters of Morsi .

This symbol is the creation of none other than Turkish Prime Minister Tayyip Erdogan. “During a speech delivered on August 17 to mark the launch of an urban renovation project in Bursa, Erdogan, a staunch opponent of Morsi’s ouster and the deadly violence which ensued, saluted the crowds several times with this sign.

The sign was also raised by several Turkish footballers after scoring goals. It is believed the first player who raised it was Emre Belözoglu, a Fenerbahçe midfielder who formerly played at Inter Milan.

“From there on, the sign was adopted by international anti-coup activists,” writes Motasem A. Dalloul in a blog for the Middle East News Monitor” says Al Arabia English .

A website was launched by activists in Turkey called “R4bia.com,” in reference to Rabaa square.

Although there is no clear origin or definition of this symbol but there are lots of explanations and definitions on social networking site Twitter. Here are some explanations.