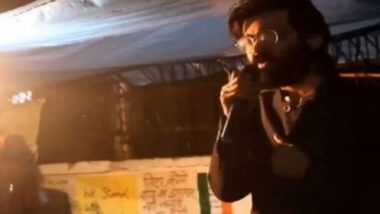 Patna, Jan 27: Police have conducted raids at the ancestral home of the self-proclaimed JNU student leader Sharjeel Imam who is being pursued by the police forces of several states for delivering a hate speech, in Bihar”s Jehanabad district.

Jehanabad police sources on Monday said a team of a “central probe agency” conducted raids in Kako town on Sunday, in a bid to trace Sharjeel and arrest him.

Meanwhile, his mother Afshan Parveen said her son”s statements are being presented in a distorted manner and also claimed that her family is being harassed.

She said Sharjeel is not a “thief or swindler who would remain absconding, and he would appear soon”.

Police said his family members were called for questioning even as Sharjeel was not found at home.

His mother alleged: “My son is being trapped. He was just voicing his protest on CAA.”

Claiming that she has not spoken to Sharjeel for the last few days, she said “we believe in the law and justice would be done to him”.

In a video that went viral on January 25, he is seen talking about splitting the northeast from India to block the implementation of the National Register of Citizens (NRC). “We know how Muslims are being treated in Assam. We have to save people from the NRC. The only way to do this is by cutting off northeast from India.”

The Crime Branch of the Delhi Police, which registered a case against Sharjeel for the provocative video, on Sunday conducted searches at various places to nab him.