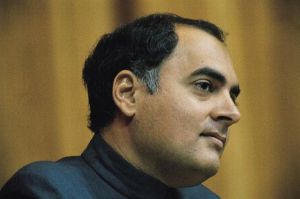 New Delhi, April 8 : The late Rajiv Gandhi may have been the “main Indian negotiator” for Swedish company Saab-Scania, when it was trying to sell its Viggen fighter aircraft to India in the 1970s, reveal US diplomatic cables leaked on the website WikiLeaks.

An Oct 21, 1975, cable from the US embassy in New Delhi details information given to it by a diplomat in the Swedish embassy. “Mrs Gandhi’s oler [sic] son’s only association with the aircraft industry (to our knowledge) has been as a pilot for Indian Airlines and this is the first time we have heard his name as entrepreneur.”

Rajiv Gandhi was then an Indian Airlines pilot and his mother Indira Gandhi the prime minister.

The cable goes on to say, “Mrs Gandhi (according to the Swedish info) has made the personal decision not to purchase the British Jaguar because of her prejudices against the British. The decision would be between the Mirage [Dassault Mirage F1] and the Viggen.”

According to the cable, the negotiator for French aircraft maker Dassault’s Mirage fighter was the son-in-law of the air chief Air Marshal O.P. Mehra. “Swedish Emboff says that Dassault has Son-in-Law of Indian Air Marshall Mehra as its chief negotiator for mirage sale,” The Hindu newspaper, which accessed the cables as part of a collaboration with WikiLeaks, said quoting the cables Monday.

In another cable, the Swedes said they “understood the importance of family influences” in the final decision.

The cable adds: “Our colleague describes Ranjiv Gandhi [sic] in flattering terms, and contends his technical expertise is of a high level. This may or may not be. Offhand, we would have thought a transport pilot [is] not the best expert to rely upon in evaluating a fighter plane, but then we are speaking of a transport pilot who has another and perhaps more relevant qualification.”

The Hindu says the Viggen pitch to India was of immense interest to the US. As one cable said, the aircraft “contains a large number of parts and components of U.S. origin which are therefore subject to USG control in third-party sales.”

Another cable says that “Mrs Gandhi’s advance toward dictatorship is now irreversible, and that French Prime Minister Chirac was unhappy with the idea of appearing to condone this development through his official visit”.

The British SEPECAT Jaguar eventually won the race, from which Saab was forced to withdraw by the US, The Hindu said.—IANS.