Kuala Lumpur : Malaysian Prime Minister Najib Razak on Friday levelled a thinly veiled criticism at US President Donald Trump at a rally protesting Washington’s decision to recognize Jerusalem as Israel’s capital, saying the warm welcome he received at the White House during a visit will not shake his determination to defend Islam.

“The US should not look down upon Malaysia,” said Razak at the rally in the Putra Mosque in front of the Prime Minister’s office in Putrajaya, days after Trump threatened to stop funding for all countries who voted against the US on the Jerusalem issue.

Razak, who has just returned from a trip to Turkey for a summit of the Organisation of Islamic Cooperation on the Jerusalem issue, urged Trump and his administration to change their mind on the issue, Xinhua news agency reported.

“We have not asked for money from the US. In fact they need our help such as our orders for their planes,” said Razak, referring to Malaysia Airlines’ purchase of 25 Boeing aircraft worth billions of US dollars.

Touted as an event for all Muslims regardless of their political differences, the rally also saw the attendance of leaders from opposition parties.

Mahathir Mohamad, the former Prime Minister who is leading the opposition coalition, also made a short appearance at the mosque.

The government led by Razak will end its tenure by next August, and it is widely expected he will call an early election. UMNO, the party which Razak chairs, has always been competing with the Malaysian Islamic Party to win over Muslim voters.

But Razak said “it’s not about politics” in his speech, noting that it’s about coming together to support Palestine. 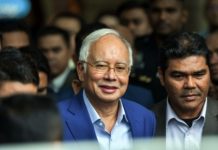 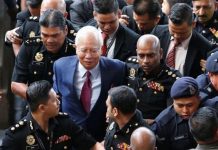 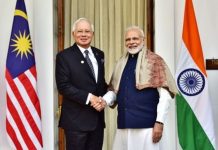