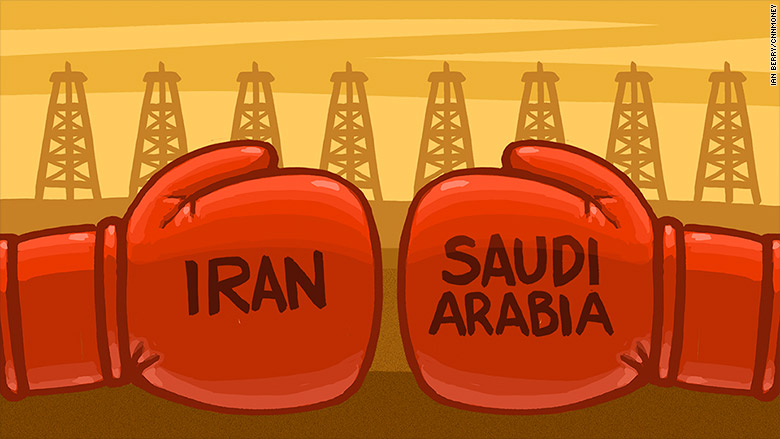 Tensions between Saudi Arabia and Iran have been increasing recently. Although the narrative developed to describe the execution of a Saudi Shiite cleric, Nimr Al-Nimr, as a sectarian dimension of the Kingdom’s policies towards Iran, Saudi Arabia’s goals are not principally fuelling the Shiite-Sunni divide. The Saudi executions were partially an attempt by Saudi Arabia to severe ties with Iran and push the tensions forward. Lifting sanctions against Iran, coupled with oil prices plummeting to around $32 per barrel remains a frightening nightmare for the Saudis.

Escalating very quickly, Iranian demonstrators broke into the Saudi embassy in Tehran and started fires, souring the already troubled relations between the two regional rivals. Crossing the line, Iran compared Saudi Arabia to ISIS following the executions. A website associated with Iran’s Supreme Leader, Ayatollah Ali Khamenei, published a picture of a Saudi executioner (dressed in white) next to an Islamic State executioner (dressed in black) with the caption “Any differences?”, drawing attention to the fact both carry out beheadings.

Slamming the Saudi monarchy, Iranian Foreign Minister Mohammad Javad Zarif said in an op-ed in The New York Times on 10 January that “Today, some in Riyadh not only continue to impede normalization but are determined to drag the entire region into confrontation.” Zarif accused Saudi Arabia of “active sponsorship of violent extremism” and “barbarism”, referring to the recent executions.

The Saudi Foreign Minister Adel Bin Ahmed Al-Jubeir responded with an op-ed in the New York Times on 19 January accusing Iran of supporting terrorism in the region and in the world. Al-Jubeir said that Iran “opts to obscure its dangerous sectarian and expansionist policies, as well as its support for terrorism, by leveling unsubstantiated charges against the Kingdom of Saudi Arabia.” Al-Jubeir continued to list the atrocities attributed to Iran since the Islamic revolution in 1979, charging Iran of being “the single-most-belligerent-actor in the region”. Jubeir’s comments appeared after Saudi Arabia’s Foreign Ministry had published a “sheet of facts” listing all the nefarious practices of the Islamic Republic.

Khalid al-Dakhil, a Saudi political commentator based in Riyadh told Al Jazeera that: “Iran executes far more people a year than Saudi Arabia, but it does not get the negative publicity Saudi Arabia has. This is something that must be addressed.”

When considering sectarianism in Islam, we should emphasize that most Muslims are not from Saudi Arabia or from Iran. Indeed most Muslims in the world don’t live in the Middle East. According to 2015 Intercensal Population Survey, the population of Indonesia is around 250 million, which is more than the population of all Middle Eastern countries (around 200 million) combined. If we are to believe that the number of Muslims in the world is around 1.5 billion, this leaves the land of the two holy mosques – Saudi Arabia – and the Islamic Republic of Iran significantly outnumbered. According to the Central Department of Statistics and Information in Saudi Arabia, the annual number of pilgrims (those who take on a journey to the sacred places of Mecca and Medina) over the past ten years was between 1.5 and three million. On average, the number of pilgrims to Mecca over the past ten years is around 24 million, which is insignificant compared to the number of Muslims worldwide. The number of visitor for religious purposes is even less than the population of Yemen.

At a first glance, the tensions between Iran and Saudi Arabia can be marked as sectarian but looking more profoundly, it becomes clear that it is a power struggle.

The prominence of religious norms in political contexts between Saudi Arabia and Iran doesn’t owe to a sectarian divide per se, but rather to the usefulness of religion inpersuasion, legitimization, mobilization, elimination, contestation, pacification and justification In other words, it is a struggle for regional dominance. According to Language Fractionalization Index, Iran, UAE, Qatar, Bahrain, Iraq, Syria and Lebanon are the most linguistically fractionalised countries in the region, whereas Lebanon, Kuwait, Bahrain, Iraq, and Syria are the most religiously fractionalised. Religious divisions contribute to creating political and social structures that enforce the status quo in the Middle East. In other words, fractionalisation guarantees the ruling elites to remain exactly where they are – in power.

In addition to the sectarian dimensions mentioned above, a pattern of alliance in the Middle East, in which states, monarchies and forces define their allies and enemies based on sectarian dimensions, can be traced.  On one hand, such a pattern results in minorities oppressing majorities such as in Syria, Iraq, Bahrain and Yemen. On the other hand, it results in majorities oppressing minorities such as in Saudi Arabia and Iran.

Such a pattern of alliance is also exacerbated by the two regional rivals backing opposing sides in civil wars in Syria and in Yemen. In Syria, Saudi Arabia supports Sunni but hard-line elements in Syria, while Qatar and Turkey support Sunni elements allied with the Muslim Brotherhood, whereas Iran backs the Syrian regime and Hezbollah.

In Yemen, a coalition includes Saudi Arabia, UAE, Qatar, Bahrain, Kuwait, Jordan, Morocco, Egypt, Jordan, Sudan and “Pakistan” has been launching airstrikes, called “The Storm of Resolve”, against Houthi rebels claiming to defend the “legitimate Yemeni government” of Abdrabbu Mansour Hadi. Houthi rebels are a Yemeni Shiite minority in northern Yemen accused of being backed by Iran. Many Yemeni civilians including children were killed by the airstrikes similar to what we see in Syria.

Noam Chomsky described the latest airstrikes against Yemen as an “extreme form of terrorism”. “Yemen has been the main target of the global assassination campaign–the most extraordinary global terrorism campaign in history – it is officially aimed at, as in this last strike, people who are suspected of potentially being a danger to the United States,” Said Chomsky on Russia Today commenting on Saudi Arabia’s involvement in Yemen.

Discrimination is commonplace in the Middle East. In both, Iran and Saudi Arabia, political activists are not only taken to prison for criticizing repression, but also tortured or flogged. In case of changing power structures in Saudi Arabia or Iran, in which minorities rule the majority, there is little or no evidence that the majority will enjoy the same rights and security as the victorious minorities.

In Saudi Arabia, the majority Sunni population oppresses Shiite minority rhetorically and constitutionally, while the Sunni royal family in Bahrain, backed by their Gulf allies, oppresses the Shiite majority. On the one hand, Shiites, who explicitly or implicitly show their faith, might face imprisonment in Saudi Arabia, according to Human Rights Watch (HRW). “Official discrimination against Shia encompasses religious practices, education, and the justice system. Government officials exclude Shia from certain public jobs and policy questions and publicly disparage their faith,” according to 2011 Report on Saudi Arabia. The oppression against Sunnis minority in Iran is even more staggering. Further examples can be found in Syria, in which a minority is oppressing the majority.

Saudi Arabia and Iran share, among others, two common factors: Authoritarian form of governance and concentration of power in the hands of few individuals in each country. Therefore, in an ethno-linguistically and religiously fractionalised region such as the Middle East, religion is an effective means to mobilise the masses, preserve power for the ruling elites, keep the public in check etc.

Waging wars of words, invoking sectarianism and oppressing those who don’t share political power are never about helping the victim in the Middle East, but rather about who is the aggressor.

The autjor  is a lecturer in journalism, intercultural communication and politics and culture of the Middle East at Fulda University of Applied Sciences and Phillips University Marburg. He specializes in the application of religion into political life and discourse in the Middle East and the editor-in-chief of the Mashreq Politics and Culture Journal (MPC Journal).