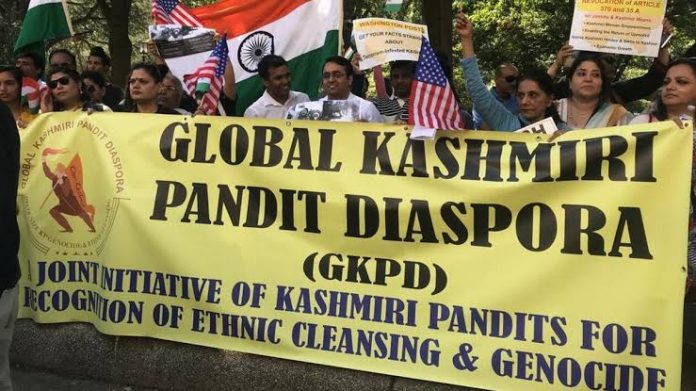 New Delhi, March 16: The Rashtriya Swayamsevak Sangh has demanded the government facilitate the Kashmiri Pandits” return to the valley as soon as possible.

In this regard, an important resolution was passed in the meeting of the All India Executive Board, the apex body of the RSS in Bengaluru. In this resolution passed separately on Jammu &amp; Kashmir, the RSS raised the demand for the return of all Hindus displaced in the valley.

The RSS in its resolution passed in the meeting held on March 14, praised the central government”s decision to revoke Articles 370 and 35A from Jammu &amp; Kashmir. The resolution states, “A large number of articles of the Constitution were either not implemented or amended in Jammu &amp; Kashmir under the guise of Article 370. Provisions like Article 35A arbitrarily added to the Constitution sowed the seeds of separatism.”

The RSS further stated in the resolution that “The All India executive board hopes that the expectations of the displaced and refugees will also be met soon. The process of safe and dignified rehabilitation of the displaced Hindus of the Kashmir Valley should be started at the earliest.” Through this proposal, the RSS has indicated to the Modi government to act quickly in this direction.

The RSS has said in the resolution that after the reorganisation of J&amp;K and Ladakh as two union territories, new possibilities of social and economic development of all the classes living in the three regions are open.

The reorganisation of the state has fulfilled the long-term aspirations of the people of Ladakh region. The RSS also praised Prime Minister Narendra Modi”s decision to revoke Articles 370, 35A and reorganise the state.