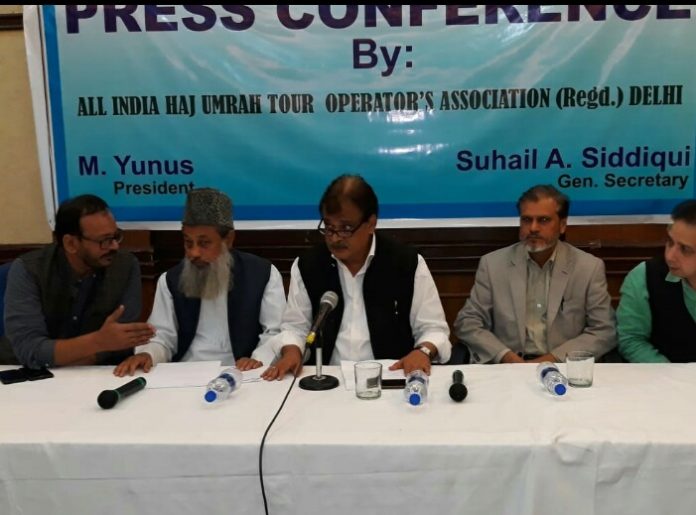 New Delhi: Hajj is one of the five tenets of Islam. It’s every Muslim’s desire to perform Haj at least once in his life time and performing Haj is obligatory to every sane, financially able and adult Muslim. Last year around 1, 75,000 Muslims from India preformed Haj through the Haj Committee of India as well as private tour operators (PTOs).

It is to be noted that more than 46, 323 Indian Muslims went to Haj through 609 PTOs but barring a few complaints, it was a smooth and hassle- free journey for them. Despite this, some Haj committee members unnecessarily target PTOs who have been doing the job as a pious profession. Recently, the newly appointed chairman of Maharashtra State Haj Committee, Jamal Siddiqui made irresponsible remarks and used un-parliamentary language against Haj operators.

He called “PTOs as illegitimate offspring of previous UPA government and other offensive words.”By this irresponsible remarks, the Maharashtra Haj chairman also castigated then Vajpayee led government too.

All India Haj and Umrah Tour Operators Association (Rgd), a representative body of Haj operators, has condemned his statement and demanded his immidetate dismissal.

Addressing the media here at the Press Club of India today, president of All India Haj and Umrah Tour Operators Association, Maulana Mohammad Younus said the Maharashtra Haj committee chairman’s remarks were highly condemnable as he even chastised the then Atal Bihari Vajpayee government which brought the Haj PTOs under the ambit of the government. He said Mr. Siddiqui’s did not have the knowledge of PTOs otherwise he would not have made such irresponsible statement.

In response to a question, he said “we vociferously demand his sacking from the chairmanship of state Haj committee as he also cast aspersion on the Vajpayee government and BJP-led government in Maharashtra must take notice of it which appointed him on the post.”

He said PTOs have been ferrying Indian Haj pilgrims since a long time and they have been selected by the Ministry of Minority Affairs (MOM) after the thorough scrutiny.

Lastyear the MoM have selected 609 PTOs out of more than 800 PTOs and calling them as “illegitimate progeny’’ of the previous government is not only a travesty of fact but also a slap on the face of Minority Ministry, he added. Before 2002, PTOs had been directly dealing with the Saud Arabia embassy here for Haj and Umrah purpose, he further informed. He said PTOs have been rendering flawless services to pilgrims of Haj & Umrah since a long time.

On this occasion, he also thanked the government of Saudi Arabia for hiking the Indian Haj quota from 1, 75,000 to 2, 00, and 000 like other countries.Besides Mualana Younus, other office-bearers of the organization also addressed the media.