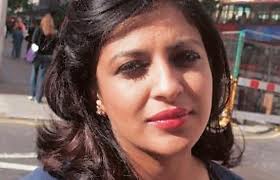 New Delhi : AAP leader Shazia Ilmi Saturday quit the party citing the lack of democracy within the party.Sources say that she may join BJP.

“There is lack of inner party democracy within the Aam Aadmi Party. The party which talks about Swaraj has failed to apply it within the party,” Ilmi said at a press conference here.

She also said that her resignation from the party is not due to the fact that she was asked to contest from Ghaziabad, from where she lost.