Fujairah (UAE): Irfan Pathan, the renowned Indian cricketer was presented with Slogans of the Sage; Mujeeb Jaihoon’s translated compilation of aphorisms by Sayyid Shihab Thangal, the late Indian philanthropist and statesman. The cricket legend was in UAE to inaugurate a new outlet of ADDRESS Apparels in Fujairah on Saturday.

Pathan promised the author to give the quotations of the late Keralite leader an engaging read, as he received the book. Also present at the ceremony were Shamsuddin, MD of Address Apparels, Dr. Puthur Rahman, prominent community activist, Ajmal Khan and Jumana Khan, social media fame icons.

Born in Gujrat, Irfan Khan Pathan is widely considered as the most talented swing and seam bowler to emerge from India since Kapil Dev. Pathan is known to have close ties with the Malayali community, especially after being appointed as the brand ambassador of Address Apparels, based in the South Indian state of Kerala. 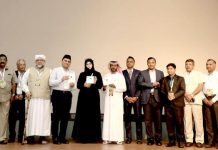 Italian translation of ‘Slogans of the Sage’ launched in Dubai