New Delhi, 5 March 2018: SDPI’s demonstration was attended by hundreds of party’s cadres and members, raising slogans expressing their demands to stop the ongoing bloodshed in the Arab land.

While addressing the media persons, Party Vice President Adv. Sharfuddin Ahmad said, the world is witnessing downright bombardment and sheer bloodshed resulting in the brutal murder of thousands of innocent civilians including women and children in the ongoing war on Syria. Reportedly scores of civilians have been killed in the recent warplanes mounted air strikes in Syria.

Sharfuddin further said, seemingly the world diplomacy is making no progress towards ending the ongoing war which is now approaching its eighth year, having killed hundreds of thousands of people and forced half the pre-war Syrian population of 23 million from their homes, with millions forced out as refugees. As per the Syrian Observatory for Human Rights the latest air strikes killed more than 12 people in Eastern Ghouta, a pocket of towns and farmland east of Damascus where the death toll has climbed to more than 230 in the last four days – the enclave’s deadliest week since 2015. And as per the Save the Children Charity, the children in the war hit areas are being ‘starved, bombed trapped’, and that 45 schools in the Eastern Ghouta had been attacked since the start of the year, with 11 completely destroyed. 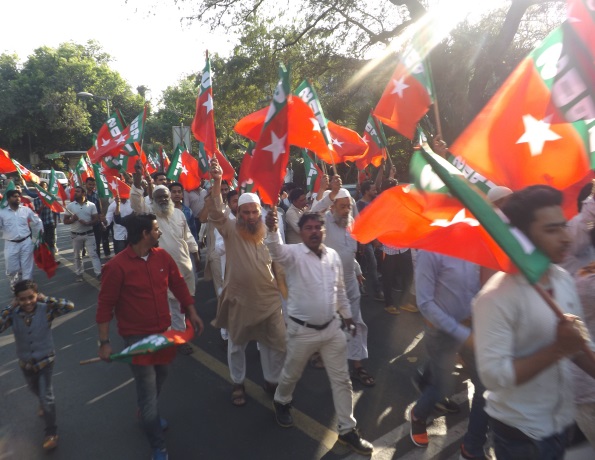 Popular Front Delhi State President Perwez Ahmed who had joined the agitation, said in his address that the humanitarian truce of around a month for aid deliveries and evacuations of the wounded called on by the UN hasn’t been fruitful. Schools are supposed to be safe places for children, protected under international law, yet they are being attacked every single day. Children and teachers are terrified that they could be hit at any moment. The siege means there is nowhere for them to escape.

SDPI expresses grave concern and is worried over the deadly attacks and demands that the air strikes must end, as civilians are made targets. This terror is absolutely unacceptable, said Party’s national working committee member Dr. Tasleem Rehmani.

Party’s National General Secretary slammed the Syrian President Bashar Al-Assad’s army, said SDPI observes that the people in Syria are living in catastrophe and demands that the UN Security Council take immediate steps and stop the ongoing war in Syria, initiate an enquiry in to the war crime being committed by the present regime in Syria and rehabilitate the war victims of Syria.

The top leaders of SDPI also petitioned the President of India to pursue the Government of India to press the UN Security Council to open the aid corridors to alleviate Syria’s humanitarian crisis and discuss the Syrian peace process to end the bombing campaign of the war which is simultaneously hitting multiple towns killing hundreds and thousands of innocent civilians and driving them to shelters or forcing them to flee.