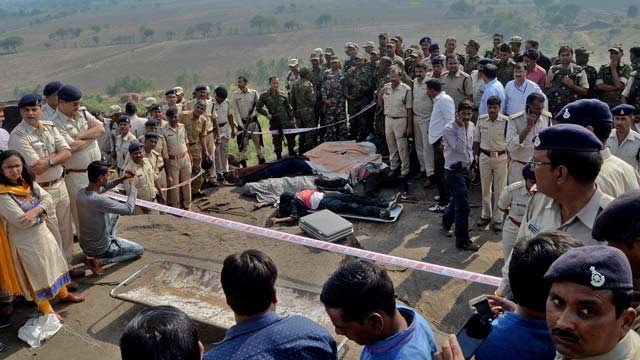 The shift in the scenario may not spell the end of the predicament if the suspect or under-trial is Muslim. There are quite a few instances of the accused suffering the dismal treatment but the entire jail staff or the police can’t be blamed for the disdainful treatment born of prejudice arising out of the religious identity. The narrative of the Muslim undertrial being killed in the cold blood in Bhopal jail break incident has raised the serious question of no holds barred harassment of the accused or undertrial accounted by the deep sense of prejudice which has come to the fore. It is no less a person than a powerful M.P. Brinda Karat, of CPM who raised the question if the Muslim identity was behind the cold blooded murder of the undertrials in the Bhopal jai break incident in Madhya Pradesh.

Ms Brinda karat’s comments questionably relating the cold blooded murder of the Muslim undertrials with the religious identity is in response to the statement of M.P. C.M. Shivraj Singh Chavan as to how long the terror suspects would be fed with the chicken biryani. Ms Karat finding the statement of the MP C.M. shameful believes that there is no reason to find any other explanation for the troublesome scenario if the accused or the undertrial is Muslim. Her concern is shaped on the basis of the question if the religious identity is responsible for the occurrence of such bizarre scenario.

M.P. CM’s reference to the feeding of the chicken biryani to the accused or the undertrial provides no logic or reason as the accused or the undertrials are not pronounced guilty by the Court of Law. The law clearly says that a person is innocent till he or she is found guilty and there is no alteration in the situation till the Supreme Court decides the matter. Any understanding of this sort tantamount to the interference in the functioning of the judiciary. What is the need of the police and the justice system in the country if the police assumes the power to decide the guilt of the suspect and metes out the summary punishment.

The irony of the situation is that such ignominious references to the biryani to the accused is not in a good taste. Shivraj Singh Chavan is not any Tom, Dick and Harry to ride rough shod over the decent and mature expression. Such offensive expression is hardly in the realm of polite conversation. The hurting remarks explain the narrow minded rhetoric’s with little regard to the balanced views and nuanced consideration.

It is not to be missed that the beauty of expression helps in shaping the better environment.

Against the unleashing of resentful rhetoric by the present political class particularly BJP men it needs to be remembered that the late president Radha Krishnan with the beauty, charm and grace of expression had impacted Russian Supremo Stalin so much that he had personally received the late President which was unconventional with his style of functioning.

The late president Zakir Hussain equally earned a lot of applause due to his chaste and sublime communication.

It was the flow and fluency of English in Krishna Menon’s communication which was massively admired by the English speaking audience.

In the neighboring country an eminent poet Faiz Ahmed Faiz did not use nastiness and vitriol when confronted with the arrest by late president Ayyub Khan. Faiz was arrested by Ayyub regime in the wake of the crescendo of resentment against the Leftist writers in Pakistan. Faiz while being picked up by the police uttered.

[what if I am deprived of the pen and the slate or the writing material as I have soaked my fingers in the blood of the heart].

In the environment full of hate and disdain the dearth of cherished expression is quite obvious.

It is to note that the respectful language is thrown to the wind but more agitating is how the situation has moved. In the ongoing controversial contentions the M.P. ATS chief disowned the theory that the alleged SIMI men had the weapons with the justification of killing the alleged SIMI activists. Throwing every norm and canon of law and morality he justified the campaign of violence against the victims trying to authenticate that they were the dreadful criminals. He went judgmental legitimizing the lawlessness in the name of combating terror.

There is an orchestrated attempt to give legitimacy to the questionable encounter of the fled jail inmates with the logic that there is nothing wrong with the fake encounter. The advocacy of the fake encounter does suggest as to what depth and extent our society is divided along the ideological and religious lines quite wedded to all the hostility.

To suit the convenience of the encounter killing the media also forays into the murky scenario with the pernicious effort to paint the devil of the Muslims to arouse the tsunami of anger and resentment against the community. There is the moral decline which can’t be separated from the harsh economic circumstances. The empty purse makes one pursue the unhealthy trends. It’s easy to target certain members of the community for awaking late without focusing on the reason that such bad habits are basically caused by the absence of work or opportunities to prosper. Without justifying the occurrence of crime the fact cannot be dismissed that the harsh economic circumstances not only fail the character but go a long way in patronizing the growth of crime.

With reference to Bhopal encounter it is said that a tongue cleaner, a steel tathali and blood sheets the innocuous items given to prisoners were used to break out of the most secure prison in M.P. Further irony is that the bed sheet was used as a ladder to scale the 32 ft wall. The mind boggling story shaped by the police to carry out liberation from the jail leaves sufficient loopholes which is far from convincing.

More than the welter of contradictions in the jail break story what is more bizarre is the murder of jail guard Ramshankar Yadav and tying up his colleague. It is not known who has killed Yadav as the CC TV camera in his room has gone non functional and the footage of the incident is missing raising the question whether Yadav was killed to trigger the violence against the SIMI undertrials.

[Given me some narration of the incident

Rammed down the throat when not understood

Let the guests hunt the prey with ease

Decorated are the trees with the sparrows].

Meanwhile the BJP leaders amidst the lingering doubts over the gruesome SIMI encounter have come up with the pet theories of nationalism. To them everything in conflict with their version is hurting the national interest. The concept of nationalism has become their monopoly and in the name of nationalism the search for truth is ruled out.

Equally disgruntling is the fact that the reports and recommendations of such inquiry commissions are confined to the dustbin of history. The fate of the Sri Krishna Commission, Madan Commissions and inquiries are too well known to need any recounting.

In the present circumstance what is needed is the out of box thinking by the Muslim & secular leadership to find credible solution to the cold blooded murder in the name of combating terrorism.