Not every day do we get to witness an event filled with academic grandeur but when it happens, it’s rightfully the talk of the town. An event highlighting such academic excellence was witnessed last week which was conducted by USTM. Founded by ERD Foundation, USTM adheres to the spirit of promoting technological education as well as enabling scholars to carry forward their work under Research & Development; in the pursuit of perfecting future leaders of the nation.

The 3rd Convocation held on the 9th of September, 2017 was beautifully carried out at their Techno City campus wherein a total of 905 degrees were conferred, of which 744 were awarded at PG level and the remaining 161 awarded at UG level.

During the ceremony, Prof. Jagadesh Kumar delivered a keynote speech where he spoke about the huge potential of North-Eastern students and also mentioned that he was delighted to learn that USTM has a 57% ratio of female students as compared to 53% ratio of female students in JNU. During his speech, USTM’s additional emphasis on Social Science also came up where he praised the University’s effort to encourage students to indulge in issues outside course curriculum.

The students and faculty members were further swayed by the powerful speech made by Prof. Jayant M. Modak, where he stressed upon the importance of higher education in the economic development of the nation. Prof. Modak marveled at the efficiency of the University to offer as many as 42 courses at both PG as well as UG level; and further stated that USTM has been efficiently contributing towards providing qualitative higher education in the North-Eastern region. It was indeed a significant milestone being recorded in the history of USTM where 26 gold medalists (17 at UG level and 9 at PG level) further enhanced the ambiance of the ceremony.

However, the event couldn’t have received a brilliant conclusion, had it not been for Shree Mahbubul Hoque sharing a few wise words addressing the past students –

“Convocation marks the beginning of another day, another journey in your career. Whatever difficulties you may face in this journey, I would like to assure all our graduating students, research scholars, aspirants of different competitive exams that whenever you feel disheartened, come back to your Alma Mater; this University will stand behind you.”

The University wishes to hold the next year’s Convocation relatively sooner, preferably within 10-15 days of results being declared. If executed, this expedition shall be considered another milestone recorded during a time where convocations are known to be delayed by as much as a year or two. 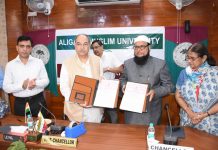 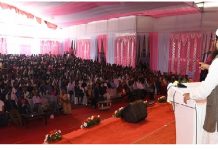 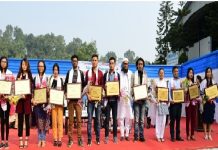