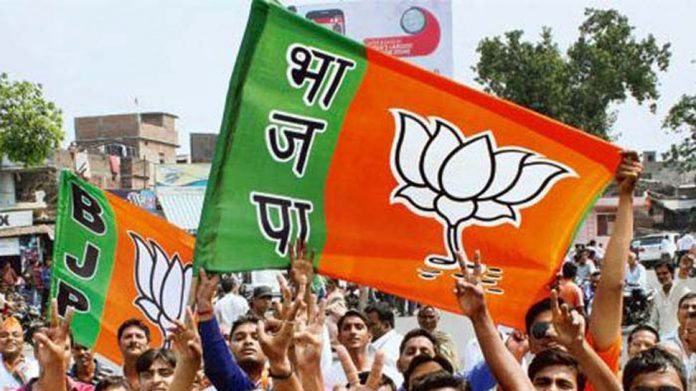 Voters did not vote on the performance of the Modi government, rather, they voted on a vision of India that RSS workers fed them day in and day out much before the elections. Millions of them went door to door talking to men, women, and youth using all the resources they could find to sell the vision that RSS has worked tirelessly since 1925 when it was formed.
Its a remarkable success on the part of an organization banned twice in India and accused of supporting the murderer of Gandhiji, the main architect of India’s freedom. It is a story of India’s love for an organization that is rooted in hatred of minorities, an organization that supported the British colonialists and spied against the freedom fighters.
Of course, electronic voting machines (EVM) played a significant role and big rallies created the perception of a BJP wave, but they alone did not bring victory to the Hindu nationalist organization. One to one contact at grassroots level did. It was the dedication of RSS workers who worked tirelessly for promoting their vision at the grassroots levels.

None of the opposition parties has that cadre and dedicated workers. None has the resources to match. Each one of their leaders is involved in some scandals at a certain point of his or her life and each has relied on RSS in one way or the other to secure their political status.

As long as RSS cadre is with BJP, India’s 63 percent voters would not be able to remove the BJP in electoral campaigns. Because elections are won by those who bring their voters on the polling booth on the election day.

Our invisible researchers in 15 states namely, Assam, Bihar, Gujarat, Haryana, Madhya Pradesh, Rajasthan, Maharashtra, West Bengal. Uttar Pradesh, Uttrakhand, Himachal, Karnataka, Telangana, Punjab, and Delhi found similarities in the campaign propaganda and style. In each state the language was different, the style varied, but the content was more or less the same. Here is what the researchers heard the BJP campaigners tell the voters.

1 Modi is the new divine avatar sent to liberate Hindus from centuries-old slavery to Muslims and Christians.
2. Muslims and Christians were essentially cruel towards Hindus. They killed Hindus indiscriminately, raped their women, converted their temples into their places of worship and persecuted the upper castes.
3. Muslims desecrated Hindu places of worship.
4. They forcibly converted Hindus to Islam.
5. They created their own country where Hindus are being persecuted.
6. Without getting rid of Muslims, Hindus would not have self-dignity.
7. Muslims cannot be trusted. They will always go against the interests of Hindus.
8, Muslims are anti-Hindus as they slaughter the cow.
9. Muslims have a plan to overtake the Hindu population of the country by producing more.
10. Muslims are a burden on India.
11. Only Modi with a tough stand can teach Muslims a lesson.
12. Modi has proven in Gujarat that he can defeat the Muslim menace.
13. Once Modi comes to power again, Muslims will be forced to behave.
14. As Hindus converted to Islam under the pressure of foreign invading Muslim armies, so will Muslim succumb to the power of Hindus and re-enter Hinduism.
15. Muslims of Shia origin are also fed up with Muslim mainstream, hence they are supporting Modi.
16. Muslim women are supportive of Modi because he liberated them from the scourage of triple talaq.
17. If Modi and BJP lost this election, Hindus will be subjugated for a long time.
18. The opposition would appease Muslims and sell the soul of Hinduism to Muslims.
19. The opposition is led by people who are foreign agents and could be hidden Muslims.
20. The opposition would sell off Kashmir to Pakistan, while Modi would help liberate Pakistan occupied Kashmir also.

In defense of their campaign propaganda, they quoted concocted history, fabricated anecdotes, and false myths. They were convinced that a Modi defeat would destroy Hinduism from its core relegating Hindus to a point of no return.

The campaign was primarily an anti-muslim campaign, even though a substantial number of Muslims were supportive of Modi because of his favors to several Muslim sects and religious groups.

The BJp used not only its volunteers but officials sympathetic to its ideology at the grassroots levels who in their private and official capacities became the party spokespersons. The grassroots workers were given the task to ensure that the voters they have talked to are brought to polling booths on the day of the election.

The money was distributed freely and intoxicants were freely available on the eve of elections.It is this propaganda that was invisible to the media that was busy covering the big rallies and focussing on stories that were irrelevant.

EVM manipulation is an accusation and given the fact that bureaucracy is owned by BJP, it is difficult to prove it. Unless the manufacturers and programmers of the machine reveal inside stories, it would be almost impossible to prove the accusation. Every computer software can be manipulated and hacked. Money has the power to silence even the worst critics.

The secular forces are weak. They have not yet convinced Indian masses that even Muslims or Christians or atheists can also be patriotic Indian, while RSS has convinced BJP supporters that only a Hindu belonging to RSS or any of its outfits can be a true Indian.

Now Modi has come to power and RSS is in total control of most of India, what is going to happen.Doubtlessly, the RSS would implement its Hindutva agenda as quickly as possible through government schemes. It would do it quietly without making news of it. It has the infrastructure to do so. Its workers would harass Muslims at various levels. Some would be stripped of their citizenship. Some would be forced to leave the homes they have been living for centuries. Some would lose their jobs and their land and some would be intimidated to convert to Hinduism. Muslims and other minorities would continue to be pushed to the margins of society.

The opposition at present has no stamina to withstand the RSS onslaught. For the next few years or decades, India would witness the rise of Hindutva fanaticism and only when this fanaticism would start hurting the Hindus who would find the RSS ideology divisive and harmful to India, India might witness some change. Until then keep on counting the numbers of lynched bodies, the raped women, the discriminated people, and the humiliated communities.  An assertive Hindutva wants to get even with Muslims in crimes it accuses Muslims of committing during the rule of Khlijis, Tughlaq, Lodhis or Mughals.