President Trump would join India’s Prime Minister Narendra Modi on stage in Houston on September 22 addressing some 50,000 Modi supporters in the US. This is the first time in the history of the United States that a sitting president would share a public stage with a leader who was once banned in the US for his alleged involvement of Gujarat carnage that shook the world in 2002. Is it pure coincidence or there is something else behind the headlines.

Modi is an RSS groomed leader. His organization believes in the promotion of a Hindu Rashtra (Hindu State) with second class status of India’s religious minorities. Trump is a businessman who has found a strong electoral ally in the form of white supremacists who want to turn the US into a white supremacist Christian country. Apparently, the agenda of the two on religious issues is diametrically opposed. Modi’s RSS wants to eliminate Christians and Trump’s white supremacists want to dominate the US and consider the RSS a Pagan religious entity.

But there is a connection between the White supremacists and the RSS, a connection that dates back to almost a century when the world was confronted with the menace of Hitler and Mussolini.  It was a connection that was established by a woman by the name of Savitri Devi. In fact, her birth name was Maximiani Portas that her Greek father and Engish mother gave her at in 1905 in France. She was a highly educated woman and was an ardent supporter of Hitler and his theory of a pure race. She served as a Nazi spy in India, where she went under the pretext of studying Hinduism at Shanti Niketan of Rabindranath Tagore and where she got married to one Mukherjee, the only known official member of the Nazi party in India. She was well versed in several Indian languages.

She believed in the purity of Aryan race and she argued that India’s upper castes are the purest of the pure Aryans because they have preserved the legitimacy of their blood through practicing a strict caste system.

She wrote a book in 1939 titled a Warning to Hindusim, in which she made four main points. 1. Hindu upper castes are the real pure Aryans and India belongs to them only. 2. Other religious groups can live in India, but under the domination of Hindu upper castes. 3. Muslims pose the greatest danger to Hindus through their population growth and without checking this explosion, Hindu upper castes cannot preserve their identity. 4. In order for Hindus to gain supremacy in India, they must demonstrate militancy and be seen as warriors.

The preface of the book was written by Gopal Savarkar, the elder brother of V D  Sarvarkar one of the prominent leaders of the Hindu Mahasabha and ardent believer in Hindu Supremacy.

Savitri Devi was a great admirer of Sawarkar and she wrote several articles in RSS and Hindu Mahasabha related publications highlighting her passion for Hindu upper castes. She was the one who paved the way for RSS activists to stay in touch with White Supremacists. The relations that were established by Savitry Devi were consolidated by frequent visits of white supremacist leaders and workers to Ashrams and seminars run by the RSS in India.

These are the relations that are now paying rich dividends to the RSS inspired Hindus in the USA. Not only, they have embraced the Islamophobic agenda of the white supremacists, but they have also aligned with Trump as a real ally of the RSS.

Trump was apparently advised by white supremacist leaders in the country to join Modi. This was also the advice given by the pro-Netanyahu camp in the USA that believes that India is the only country that can contain a nuclear Pakistan. It is in this context that the shaking of hands between an apparent racist and a known fascist should be seen. Trump has eyes on the next election. He understands the monetary power of some 2.4 million Hindus in the US, even though the number of Hindu voters is less than half a million. But with 40,000 medical doctors, 34 percent IT force and a heavy presence in the real estate sector they form a formidable electoral group, Trump would love to be his supporters. Even though it is the Democratic party that has four of its congresspersons from the Hindu community, but under the changing political landscape, it is the Republicans under Trump that the Hindu majority in the US, inspired by the RSS is supportive of without realizing that their tactical alliance would ultimately hurt their own religious community. 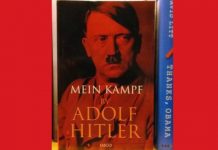 Hitler’s Hindus: The rise and rise of India’s Nazi-loving nationalists