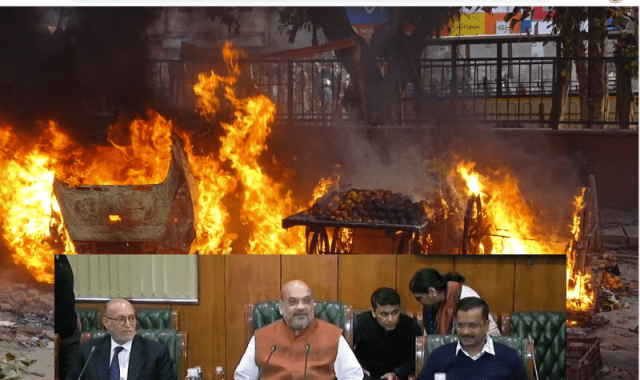 Delhi has seen fires, sacking, riots and pillage throughout its history. But only in recent history, first in 1984, and then in examples like the 2014 riots in Trilokpuri in Delhi, soon after the BJP swept to power, and now in 2019-2020 with the anti-CAA protests, have sitting governments allowed utterly preventable events to go on unabated under their command, on their watch.

It is hardly difficult to notice the irony that the two most powerful people currently in Delhi have presided over, abetted and prolonged some of the worst mass-violence in India – that in Gujarat in 2002.

Yet, that was in Gujarat, a slight distance away from the capital, Delhi. It was sort of their fiefdom, their corner of the world, and they thought they could get away with their collusion and obstructions of justice.

One would have thought that unfolding violence – communal or otherwise – would be attended to with a little more alacrity in Delhi since the administration is under constant public gaze with so much of the national media based here, so many political leaders are camped here at any given time, and all the major foreign representations are in this city.

Yet, one again, in the instances of the latest violence in northeast Delhi, the administration has basically chosen to be invisible, silent, and cruelly deadpan. There has been no real reaction from either Amit Shah, the Home Minister or Narendra Modi, the Prime Minister. They have experience in this kind of thing. To draw out the violence, to allow the “Hindus a chance to vent their anger.”

At least 20 people have died till now and nearly 200 injured. The violence continues unabated at the time of writing. Twenty people, in just over 3 days, in the national capital – under the very noses of the political class. And they sit there unmoved, and worse still, unashamed. Maybe one should amend that to say, uncaring.

Add to the two national-level Neros, we seem to be harboring the state-level Nero too – the Delhi CM. While stepping in early to urge the LG of Delhi to bring the violence under control, he has not exhibited any actual steps to contain the situation. This is the same person who, even as an elected official earlier, took on other elected officials for their inaction, by sitting in protests and dharnas.

The least he and his party-members could have done was to visit the localities promptly, oversee the safety of the people to the extent they could, and arrange some proper relief operations. None of that. They have been watching from a distance and maintaining a respectable distance, as if it is happening not in the state they just won handily, but on another planet.

It is truly heart-rending to see how official apathy can let the worst happen uncontrolled, allowing innocent people to die, when they have the best possible law-and-order machinery in the country at their disposal.

Many of us might not have been fully aware of the way the Gujarat 2002 violence unfolded – and many others of similar nature before and after – but now we get a real-time glimpse of officially managed and orchestrated killing of common people right in front of our eyes, in the capital city of India.

Gautam Nilamber is a writer and social-activist who works for the most marginalized.