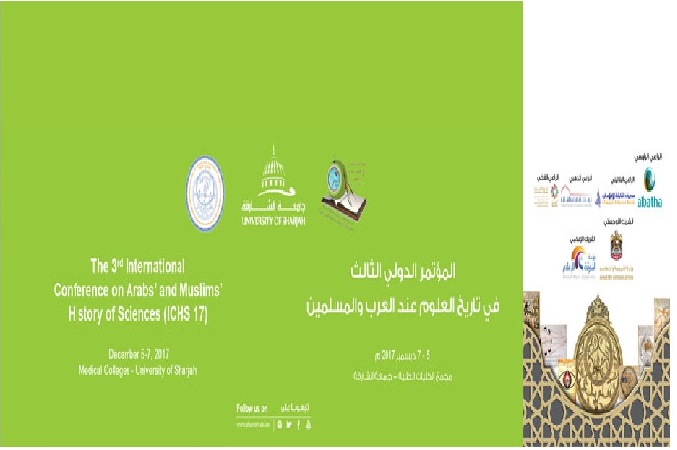 The College of Arts and Sciences of the University of Sharjah, Sharjah, United Arab Emirates organized a three-day landmark event, “Third International Conference on Arabs’ and Muslims’ History of Sciences”, during 5-7 December 2017 under the theme “The Arabic & Islamic Scientific Heritage: Innovation, Acculturation, and Coexistence” (http://www.sharjah.ac.ae/ichs17).  The conference was held under the patronage of His Highness, Shaykh Dr. Sultan Bin Mohamed Alqassmi Member of the Supreme Council of the United Arab Emirates, Ruler of Sharjah and President of the University of Sharjah.  Dr. Sultan has completed a PhD with distinction in History at Exeter University in 1985, and another in the Political Geography of the Gulf at Durham University in 1999.

The conference offered valuable opportunities for knowledge exchange, networking and learning about the Arabs and Muslims scientific and scholar heritage and latest findings and discoveries in the field.  The conference had the following themes:

The three-day event examined and discussed more than 150 scientific papers, delivered by notable experts from over twenty countries.  During the conference, the attendees watched a film about the history of the conference and the objectives it is seeking to achieve.  There was an exhibition accompanying the conference, which had rare manuscripts, archeological artifacts, and the valuable references and books from the UAE.  The conference also had tourist visits and cultural evenings.

The University of Sharjah was established as a non-profit institution for higher education in October 1997. The University is comprised of fourteen colleges catering to over fourteen thousand students with a faculty of about six hundred.  The University currently offers a total of eighty-five academic degree programs including fifty bachelor degrees, seventeen master’s degrees, seven PhD degrees, one graduate and ten associate diploma degrees.