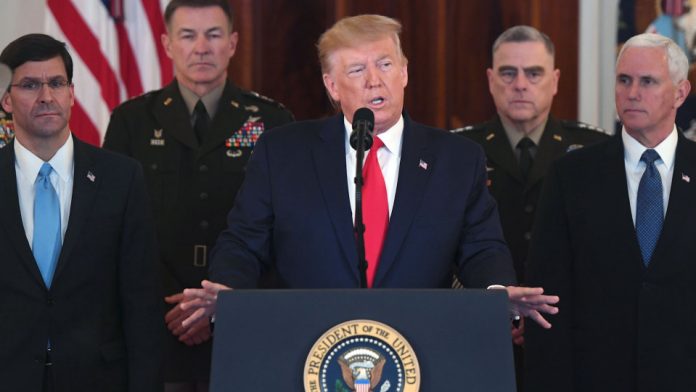 New York, Jan 8: An internationally isolated US President Donald Trump on Wednesday backed down on immediate retaliation against Iran for its attacks on American bases and appealed to Western leaders to join his campaign against Teheran.

While affirming that the US kept its options, he seemed to be taking a way out of imminent violent confrontation that could spiral into a war.

Flanked by military leaders, he said in an address to the nation from the White House, “Iran appears to be standing down which is a good thing for all parties concerned and a very good thing for the world.”

Equally, his speech signalled he was also standing down for now despite his macho rhetoric.

Iran retaliated with a tepid missile attack on two bases in Iraq with US personnel on Tuesday that did not kill anyone or cause major destruction.

Trump said, “No Americans were harmed in last night”s attack by the Iranian regime. We suffered no casualties. All of our soldiers are safe and only minimal damage was sustained at our military bases.”

Iran”s Supreme Leader Ayatollah Ali Khamenei made it a symbolic attack, describing it a “slap on the face.”

Iranian Foreign Minister Mohammad Javad Zarif said Teheran “concluded proportionate” measures in retaliation for the killing of Soleimani under United Nations Charter”s self-defence provisions, indicating that it was a calibrated face-saving move rather than attempt to raise the level of confrontation.

Isolated by NATO and other Western allies, Trump appealed to them to join him in putting pressure on Iran.

“The time has come for the United Kingdom, Germany, France, Russia and China to recognize this reality. They must now break away from the remnants of the Iran deal or JCPOA.”

Trump had withdraw from the Joint Comprehensive Plan of Action (JCPOA) that was reached by UN Security Council permanent members and Germany to limit Iran”s nuclear weapons programme.

Iran has said that it is no longer bound by it and would go ahead with its nuclear programme.

He said that stricter sanctions would be imposed on it and he would ensure that it would never develop nuclear weapons.

Trump also reached out to Teheran, telling it, “ISIS is a natural enemy of Iran. The destruction of ISIS is good for Iran. And we should work together on this and other shared priorities.”

The US and militias linked to the Quds Force worked in tandem to fight the ISIS in Syria and Iraq leading to its defeat and rout from territories under its control.

Attacks on the militias and Iran could end up re-empowering the ISIS, whose operatives and sympathisers have carried out attacks within the US.

Trump was, however, silent on the killing of three American — a military personnel and two civilians –on Sunday were killed on Sunday in Kenya on Sunday by a Sunni terrorist organisation, al-Shabaab.

While Soleimani”s killing followed the attack in Iraq that took the life of an American by a militia linked to Shia Iran, there has been no counter-attacks on al-Shabaab or high decibel rhetoric.

US allies in Europe and elsewhere have cautioned the US against escalating the confrontation against Iran.

Domestically, even Trump”s cabinet members like Secretary of State Mike Pompeo and Defence Secretary Mark Esper have distanced themselves from the extreme warnings from Trump of destroying cultural sites in Iran.

Democratic and other politicians, while relieved at the killing of Soleimani, who was responsible for the killing of US troops in Iraq, were opposed to the manner in which he was killed in Iraq.

Iraqi parliament has demanded the removal of US troops from the country because of the attack within the country.

Standing down would also mean Trump keeps his promise to his base to avoid foreign military adventures, while the killing of Soleimani is a show of strength for them.