Mohammad Hyder and his mother

New Delhi: 50-year-old Aasifa Muzaffar Khan was thrilled to see the name of her son, Mir Mohammad Hyder, on the list of candidates selected for admission to B. Tech (Mechanical) in Jamia Millia Islamia. Within minutes, she along with Hyder, his husband Abdul Majid Mir and his daughter Arba Fatima left Srinagar for Delhi by car as they were asked to report till 1 pm on 20 February, just two days after publication of the list.

They were so much excited that they forgot to even put a lock at the main door of their house before heading towards Delhi.

However, the journey they started with so much enthusiasm finally resulted in hopelessness, misbehaviour and intimidation by Jamia staff in Delhi.

Hyder and his family were delayed by a few hours as the highway was jammed and only one-way traffic was plying due to snow-fall in that winter season. He believes that the delay should be waived as a special case as it was caused by a natural calamity, ”on which nobody has any control”. However, his concern was not considered, rather they were misbehaved and threatened with FIR by Jamia staff.

Throughout the journey they were in touch with Jamia staff and were updating them with the situation.

Hyder’s mother Aasifa Khan said that a professor who is also the coordinator in the Faculty of Engineering and Technology, threatened them with FIR and police arrest, another professor, whose name she doesn’t remember, ran to beat her on one occasion

”The kind of embarrassment I had to face in Jamia was unprecedented in my life… I won’t call them Muslims because for a Muslim, adhering to moral standards is must, which was lacking in them,” she said.

Hyder and his family members reached Jamia Millia Islamia on the evening of 20 February (Saturday). Security guards did not let them enter the campus saying that offices are locked and they will be open on 22 February.

They reported at Jamia Millia on 22 February 2021 sharp at 9 am. ”We were asked to submit an application for waiver of delay, which we submitted immediately. We were then told to wait till the next day evening. We were also told that they will contact us. When nobody contacted us, we again went to the University on 24th February to know the status. We were directed to meet Dean, Engineering Department as our application had been forwarded to him and were told that he will do the needful. We met him and he told us that he doesn’t know anything about it.”

Hyder says that they kept going from one office to another for 13 days. Her mother broke down in front of several officials but nothing happened. ”At last, we were not now even allowed to meet concerned authorities,” he added.

On 22 February, they had met Jamia’s Registrar and Controller of Examinations Dr Nasim Hussain Jafri and he had assured them to do the needful in the matter. 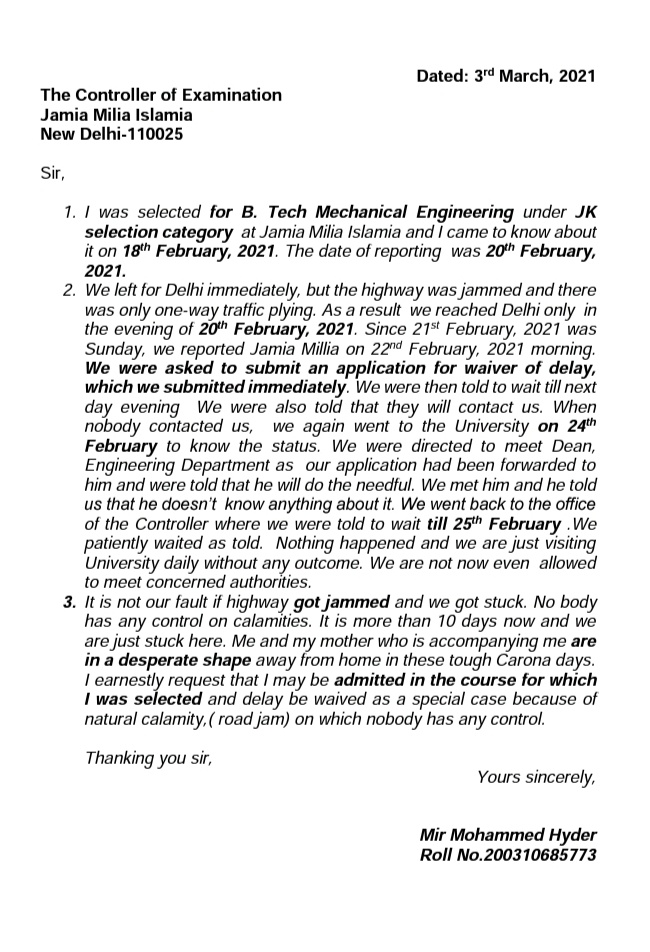 But when Hyder were not granted admission they made repeated attempts to meet Dr Jafri, they followed him from his office to his residence but he didn’t meet them. In return, they were misbehaved by his Personnel Assistants and other staff in his offices.

The university’s Vice-Chancellor Najma Akhtar was on leave and had gone to the US. In her absence, Dr Jafri and Pro-Vice-Chancellor Ilyas Hussain had the authority to take a final call in the matter. However, they did nothing.

”We have come to know that VC Najma Akhtar has recently resumed office but still, we have received no response from them. My son’s application is still pending,” said Mrs Aasifa.

They had come to the national capital expecting that they may return after one or two days. But they had to live here for more than 10 days. So, they went short of money. At the end, Aasifa had to sell her golden chain to bear the cost of flying back to Srinagar.

Whatever  you want to know about that case send us in written , was the reply of  Dr. Nazim Hussain Jafri, the  Controller of Examinations.

Crypto -currency ! Is it Sharia compliant?

By Syed Ilyas Basha Crypto-currency is an asset in virtual form, made available by its launchers for trading activities. It is exchanged in lieu of internationally tradable currencies like US…

Ramadan – A month of benevolence

By Muslim Mirror Network Ottawa (ON)– The conviction of former Minneapolis police officer Derek Chauvin on all counts for the murder of George Floyd was an outcome that was welcome,…

US minorities urged to unite against racism, xenophobia