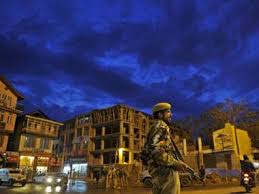 Srinagar, July 24 : Two members of an Imam’s family were killed while a third family member is battling for life after their throats were slit here Wednesday, police said.

Imam of Iqbalabad (Bemina) mosque Ifftekhar Ahmad said he found his wife, son and daughter lying in pools of blood with slit throats when he reached home after offering the morning prayers, said police sources.

“They were shifted to a hospital where attending doctors pronounced the son and the daughter as brought dead,” a senior police officer said.

“Doctors said the condition of the Imam’s wife was critical and they were doing their best to save her,” the officer added.

The Imam belongs to the border town of Gurez in Bandipora district of north Kashmir.

Senior police officers have rushed to the spot after the news spread in the area, triggering tension.

Police have registered a case of murder. Forensic evidence is being collected to nab the attackers.—IANS.