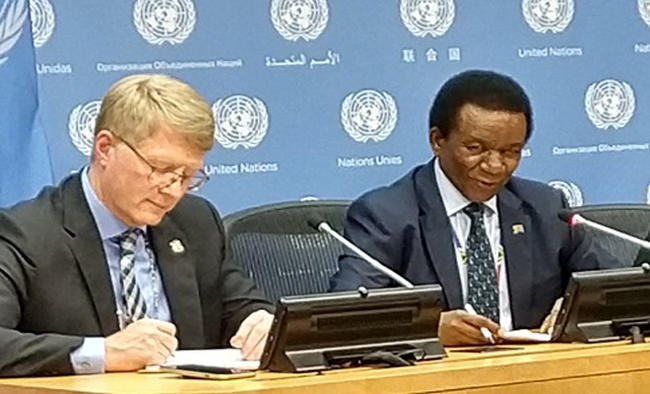 Matjila said on Tuesday, “In the Council, I don”t see that in the near future there will be joint statement on Jammu and Kashmir” recalling that the divided Security Council could not even agree on a one-paragraph statement at its August meeting on Kashmir.

He was replying to a reporter, who said at his news conference that there was global inaction on Kashmir and asked what Matjila would do about it.

The permanent representative of South Africa took over the rotating presidency for this month on Tuesday.

Giving an insight into the Security Council meeting held on August 16 at the insistence of China, he said, “The Council was so divided that we could not even issue a paragraph statement, we could not even issue a paragraph to say we are appealing for both parties to resolve the issue amicably as per Shimla accord … (signed) when they met in Shimla. They agreed that this was the formula they were going to use.”

“We reminded them of their own undertaking of how to resolve this situation in Jammu and Kashmir,” he said.

Matjila recalled his days in India as the first High Commissioner of South Africa to India after apartheid ended and Nelson Mandela became President and served from 1994 to 1999.

He said that the Kashmir situation came up as he was coordinating Nelson Mandela”s visit to India.

He said, “I am alive to the situation in Jammu and Kashmir, and I used to coordinate in 1996 President Mandela”s visit to India and discussed this matter to say, ”Is it not possible for the leaders of these two great countries and intellect, capacity, to sit and discuss the issue, Jammu and Kashmir”?”

“Now as a President I could do what I can do, but in the end the Security Council have to decide,” he said.

He said that he was aware of the speech made by Pakistan Prime Minister at the just-ended high-level General Assembly meeting and India”s response.

“You can only hope that the situation will be resolved amicably for both the sides,” he said.

Matjila acknowledged that the Shimla agreement signed by India”s Prime Minister Indira Gandhi and Zulfikar Ali Bhutto, who was then Pakistan”s President.

That agreement says that disputes between India and Pakistan were bilateral matters to be resolved between leaving no room for third party involvement.

At the closed-door meeting in August, France strongly opposed the Council getting involved in the bilateral matter by even issuing a statement and a majority that included Russia and the US took the same stand, according to diplomatic sources.

(Arul Louis can be contacted at arul.l@ians.in)