New Delhi : Proving her mettle that she is second to none when it comes education Sana,  a girl from Urdu medium school of Old Delhi has emerged as a topper in  XIIth CBSE Delhi government schools exams.

Sana scored 97.6 per cent marks in the Board examination and she is the fourth of her sisters to complete education from the same school.

She is  student of Sarvodaya Kanya Vidyalaya No. 2, Jama Masjid in Old Delhi,

Hailing from an average family how did Sana managed to score high in her studies. She also had topped the exam by scoring 89% in Xth Class.

Two years ago, Sana’s elder sister, Umra, had topped the school in her class XII CBSE examinations. Her youngest and fifth sister is also studying in class IX in the same school.

The 17-year-old Sana is the daughter of a Cook at Matia Mahal’s famed Al Jawahar restaurant. Her father and mother, a housewife, both stopped studying after class VIII. And these four sisters are the first ones in the family to have completed Class XII.

She  wants to pursue graduation from St. Stephen’s College and  become an IAS officer.

Delhi Education Minister Manish Sisodia on Friday spoke to Sana and two other toppers of the state’s government schools, which outperformed the national as well as city pass percentage.

Gyan Kaur with 97 per cent was the second topper. She is from SKV, Ramesh Nagar.

The third position was shared by two students. Nikita Dhaiya from Rajkiya Pratibha Vikas Vidyalaya, Dwarka, came third with 96.6 per cent, while Naman Gupta from Government Co-ed School, Najafgarh, also got the third position by scoring same percentage of marks. 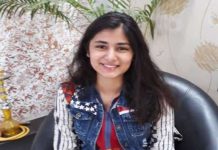 Nida Khanam says thanks to Muslim Mirror and her well-wishers

Uncertain future of Nida Khanam, who secured 99% in English and broke all previous records