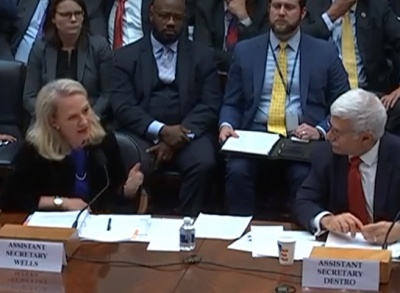 New York: While US President Donald Trump”s Administration gave a reassurance that relations with India was a partnership and that it does not take a position on the revocation of Kashmir”s special constitutional status, India”s restrictions on communications and movement there have been criticised harshly by several members of US Congress.

“When we see Indian institutions have failed or respond slowly it is something that we take up but this is not a relationship of dictation, it is a relationship of partnership,” Alice Wells, the Acting Assistant Secretary of State, said at a hearing on human rights in South Asia held by a Congressional subcommittee in Washington on Tuesday.

She said, “We are not taking a position on Article 370,” the constitutional provision that gave Jammu and Kashmir as special status, which has been rescinded.

But “we are taking a position on whether Kashmiris can live with dignity and have full economic and political life,” she said.

She said that the State Department had expressed the concern over the detentions of local residents and political leaders, including three former Chief Ministers of Jammu and Kashmir and has “urged Indian authorities to respect human rights and restore full access to services, including internet and mobile networks.”

About 12 members of Congress who spoke during the four and a half hours of hearings uniformly expressed concern about the detentions, restrictions on communications and movement and the prevention of non-Indian journalists from visiting Kashmir.

Many of them said that the issues were raised by their constituents and several times the audience at the hearings clapped when statements critical of India were made.

Sherman said that it was important for India to restore normalcy to Kashmir and restore communications.

Some of the Democrat”s hostility towards President Donald Trump spilled over to India. The chair of the House Foreign Affairs Committee, Elliot Engel said that Trump gives “a free pass” human rights violators and the State Department was giving India a “free pass” on revoking Article 370.”

Many of the members of the House of Representatives asked Wells and Robert Destro, the Assistant Secretary of State for Human Rights, what the administration was doing to ensure that human rights were respected in Kashmir and the government lifted the restrictions there and one, Democratic Representative Anthony Brown, hinted that the US take economic measures against India.

That was when Wells said that in relations with India the US would not dictate to it as it was one of partnership.

She said a country of 1.3 billion people has survived four wars, the suspension of the constitution under former Prime Minister Indira Gandhi, “it has survived Maoist insurgencies and insurgencies in Kashmir, and at the same time it has continued to lift people out of poverty and incrementally make advances. We respect that. So that conversation with India will continue.”

She repeatedly told the Representatives that Secretary of State Mike Pompeo and other State Department officials had spoken to Indian officials about bringing normalcy to Kashmir.

She told them that Trump had offered his good offices to Prime Ministers Narendra Modi of India and Imran Khan if they both agreed to his involvement.

But she also said that the Kashmir issue was a matter that India and Pakistan should resolve bilaterally.

Wells said that the US welcomes “actions by the Indian government to improve the situation and address local grievances” in Jammu and Kashmir.

“While conditions in Jammu and Ladakh have improved, the valley has not returned to normal,” she said.

She said the picture was mixed in Kashmir and “we understand that curfews have been lifted in most areas, land lines restored, and a majority of detainees released. Still, internet and mobile phone service remain blocked in some districts.”

But she also said that Washington was “concerned about reports of local and foreign militants attempting to intimidate local residents and business owners in order to stymie normal economic activity.”

She told Representatives that while US diplomats had not been given permission to visit Kashmir, the embassy in New Delhi was in touch with journalists, civil society groups and others there to find out what was going on.

She said that Pakistan”s harbouring of terrorist groups like Lashkar-e-Taiba and Jaish-e-Mohammad is destabilising, and “Pakistani authorities remain accountable for their actions.”

A successful India-Pakistan dialogue would be possible only if Islamabad took irreversible steps against terrorists in its territory, she added.

The head of the Congressional Pakistan Caucus Sheila Lee Jackson came to the defence of Pakistan asking “not to use the constant refrain of Pakistan in reference to terrorism.”

She said, “Pakistan”s military has lost their life in their fight against terror and we should acknowledge that. I don”t think you would have government in Pakistan that condones the idea of terrorism.”

Wells replied, “While I share your praise for Pakistan”s courage in losing over 70,000 lives, military and civilian, in the fight against those groups that were targeting the Pakistan state, we are looking for the same level of commitment militants targeting the Indian state or the Afghan state.”

While some Representatives took a balanced approach, others were hostile to India.

Indian-American Representative Pramila Jayapal, who is on the left in the Democratic Party criticised the BJP and the RSS saying that minorities were in danger. She said that in a recent visit to India she found that even Hindus were fearful and the media was under pressure.

She launched a strong criticism of the government”s actions in Kashmir and said that she would be introducing a resolution on Kashmir.

Representative Ilhan Omar, a leftist Democrat, picked up her refrain about the BJP and the RSS and hyperbolically warned of a “genocide”.

Giving the moderate view of the Kashmir situation, another Indian-American Representative, Ami Bera, said that the US and India shared the core values of democracy and human rights and the “sooner we can get back to normalisation of communication and press and other being able to visit, I think it is in India”s interest to do that and certainly in the world”s interest.”

Ted Yoho, the ranking Republican on the subcommittee, said that the Kashmir issue should remain between India and Pakistan and that repealing Article 370 was within India”s means. But he said that India should remove the restriction in Kashmir and added, “We don”t think anyone should live under those circumstances.”

During the hearings that was to cover all of South Asia, most the discussions centred on India, although Sindhi rights advocate Fatima Gul spoke to the subcommittee about the plight of minorities in Pakistan.