New Delhi, August 23: Dr. M.J Khan, General Secretary of Uttar Pradesh-based Peace Party, turned his coat on 19th August and joined Bharatiya Janata Party along with reportedly a crowd of 200 people. Though Mr. Khan formally joined the BJP now but a statement from his organization clearly indicates he has been working for the saffron party for last 14 years.

Dr. Khan played key role in establishing Peace Party in Uttar Pradesh and the party won 4 seats in the last UP Assembly elections. Dr. Khan is graduate and post graduate in agriculture (US), master in business administration and doctorate in management (UK). He is the Chief Editor of Agriculture Today. He is also the President of Agriculture Professionals Group and President of National Economic Forum of Muslims (NEFM), said a statement released by NEFM.

The statement said Dr. Khan joined BJP on 19 Aug, 2013 and was inducted by BJP President Rajnath Singh along with his 200 supporters.

However, the most crucial information provided by NEFM of Dr. Khan is his secret association with BJP in last 14 years.

“In his address Sh. Rajnath Singh said that Dr. Khan has been a strong support to BJP during the last 14 years and his formally joining would greatly help the party to strengthen its farmers agenda as well as in reaching out to the Muslim community, esp the Muslim youths across the country,” reads the press statement by NEFM which is headed by Dr. Khan.

This statement reminds one the allegations leveled against the Peace Party and his president Dr. Ayyub on the eve of last Lok Sabha elections in 2009 that they were being supported by the BJP to split Muslim votes in UP. In a telephonic talk with this correspondent, however, Dr. Ayyub had refuted the charges. 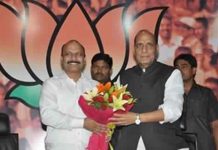 Some truths about IMPAR and its founder M. J. Khan