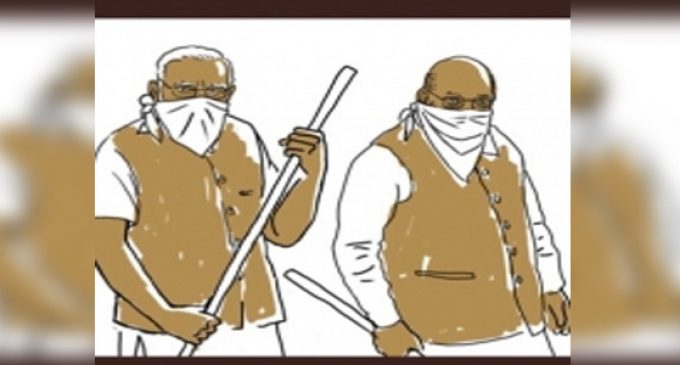 With the BJP-led NDA coming to power with a thumping majority in 2014, we saw opposition take a backseat in the parliament. As the NDA practically reigned over parliamentary proceedings, a new opposition emerged outside of it. This opposition however came not from the elected politicians but from the students within University campuses, especially those in Jawaharlal Nehru University. Realising the threat that the students could pose to the Centre’s dream of a totalitarian regime, the government hit back with sedition charges against student leaders. This incident marked the active, visible presence of students on the political scene henceforth as an opposition to the tyranny unleashed by the fascist regime.

Since 2016, we have seen a number of student protests across the country in various Universities like AMU, BHU, HCU, etc. However, the protests that erupted in response to the Citizenship Amendment Bill being passed by both houses of the parliament to earn a legislative legitimisation in order to become a constitutional act (even though its constitutional validity is suspect) have been unprecedented, to say the least. A democracy that found glory in calling itself so merely because it gave its people the right to vote is finally waking up to active political involvement of its citizens. As thousands of students gathered at Jamia Square, along with the locals on December 13th, for a long March to Parliament Street, the country blossomed with a new hope. But it wasn’t long before those hopes were crushed by the police crackdown on peaceful protesters. A day that had begun as an attempt at rebuilding a democracy from its ruins ended with its minority being pushed further away from the fringes it had always occupied in the national political discourse with Muslims feeling more threatened and voiceless than ever.

However, what followed the brutal state sanctioned attack was a nation waking up to the muffled cries of sections of the society that had always been ignored. Voices emerged from each corner of the country as citizens, mostly comprising of the country’s youth population, began taking to the streets to protest against a bigoted law. This largely student- driven movement that has since gripped the country does not only attempt to restore the health of a crumbling democracy but has also facilitated the politicisation process for a lot of people. Those who had earlier maintained a ‘neutral’ stance or worse, laid claim to their privilege of being ‘apolitical’ suddenly began to realise what was at stake. While the year 2019 was marked by protests across the globe for reasons pertaining to economics and governance, Indian citizens had been mute spectators to the horrors that unfolded in many forms since 2014- the economic slowdown (thanks to demonetization and GST), farmer suicides, lynchings, witch-hunting of academics and intellectuals, revocation of article 370, etc. The protest demonstrations across the country are not just the logical conclusion to the anti- citizen moves of the centre but also results of the active involvement of a large number of students spear-heading them.

It is notable that these students have also been the ones who have largely been at the receiving end of police brutality. While the visible militarisation of the campuses began some years back, the brutal attack on peacefully protesting students has only intensfied in the recent years, under the BJP regime. The year 2019 itself saw a series of attacks on students, beginning with JNU. On November 11, the police not just used water cannons to disperse the huge crowd but also brutally beat up students who had gathered to peacefully protest against the fees hike. December 13th and 15th saw JMI and AMU bearing the brunt of police brutality. Just two days back, JNU once again was reeling under what seems like a planned attack on its students as ‘masked assasilants’ barged into the campus and went on a rampage, brutally attacking students at their will. While the Police did not have qualms over barging into the JMI campus and opening fire on peacefully protesting students, they waited for a ‘formal complaint’ before intervening to prevent goons from attacking and ransacking the institution. The militarisation of campuses and the attack on students within the University campus that has very problematically become the norm now is deeply concerning to say the least. If anything, it is symbolic of the government’s fear of thinkers and changemakers, and is a marker of a new low set by this totalitarian regime.

The University space has always been one that is conducive to critical thinking and hence it fosters debates and discussions. Students do not just have a right to voice dissent but it is their historical duty to steer the socio-political discourses into specific directions that are crucial to a democracy. And while these students did not take to the streets in such large numbers in response to the failure of the Modi government on economic front, the opposition to CAA has united the country- despite the many attempts to fragmentise- because of the fact that it presents an existential threat. Many sections of the society who had never voiced an opinion before largely because they were rewarded with a livable life for their silence, felt a need to assert themselves via the medium of these protests. The force in the collective voice of the nation continues to increase as more and more people begin to realise the importance of being opinionated, rather than being ‘apolitical’. The signs of a particularly horrifying history repeating itself are too difficult to ignore, and even more so – the live consequence of it playing out in Kashmir now.

Undeniably, students have had a huge role to play in ensuring the participation of maximum people in these protests. Moreover, students seem to have successfully replaced the parliamentary opposition as well in terms of its function. Commenting on the ongoing protests, veteran photographer Raghu Rai said “I have been to. The protest(s). Those were innocent school, college-going students protesting there. I didn’t see any Hindu or any Muslim protesting. The (central) government should realise the mess they are making.”

From researching on the topics to printing and distributing pamphlets; from chalking out protest plans to ensuring the execution; from leading protests to creating awareness, they have done it all, and the country owes it to them for this one.  From students returning medals and degrees, to students getting beaten up, the country has suddenly found itself echoing with the voices and following the example of the young. While this positive development reinstates some hope in democracy, it is crucial that the road they further pave be a new one. Because once all of this is over, one hopes that the country sees the emergence of better leaders from among these youth. If this movement is touted to be the Indian revolution, here’s hoping that it usurps the old systems in order to open up doors for change. While the task is challenging, it is certainly not an impossible one. With the sheer determination, courage and resilience of the students that we have seen so far, it is not entirely improbable that the country gathers its loose threads just in time to catch democracy from slipping away.