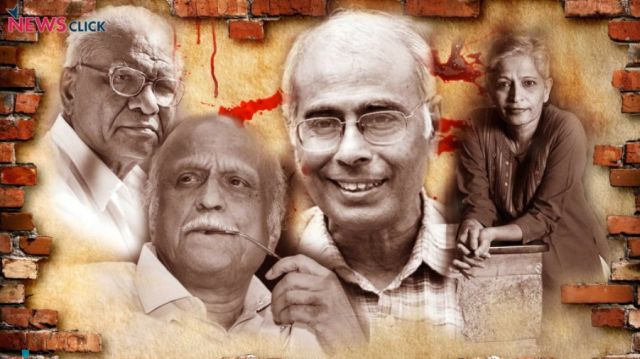 Wagle has been threatened by the Sanstha

When the Maharashtra Anti Terrorism Squad (ATS) raided a middle class home in Nallasopara, near Mumbai, and arrested the alleged Sanatan Sanstha member Vaibhav Raut, I was not surprised.

When they confiscated 8 bombs, gunpowder, detonators from his house, I was not shocked either.

I am aware of the underground activities of radical Hindutva groups. What surprised me, however, was their guts to carry out such activities in broad daylight while the Dabholkar-Pansare-Kalburgi-Gauri Lankesh murder investigation is on and Mumbai High Court is supervising the investigation.

It clearly indicates impunity. ATS arrested two more people in connection with this case and confiscated pistols from them. One of them is linked to Sambhaji Bhide’s organisation.

Police officers claimed they have unearthed a conspiracy to plant bombs in various cities of Maharashtra. We still don’t know the purpose and the kingpin behind this act. ATS has refused to reveal more details.

But gravity of these raids is alarming when seen in a context. The raids have taken place against the background of Independence Day, Eid and the Maratha agitation.  Sanatan Sanstha has denied any connection with Vaibhav Raut, but they are ready to fight his legal battle. Making bombs, apparently, is a patriotic act for a Hindutva cause.

Spokesperson of the organisation told reporters that Vaibhav was a member of Hindu Janajagruti Samiti (HJS), but not Sanatan. Sanatan has used this tried and tested strategy in the past too.

But HJS is an umbrella of the radical Hindutva groups, of which Sanatan, Ram Sene, Hindu Rashtra Sena, Hindu Vidhidnya Parishad and number of other extremist organisations are members.

Sanatan Sanstha organises their annual conference at its headquarter in Goa. It is a multi headed hydra to put off investigating agencies.  The debate whether the Sanatan Sanstha should be banned has resurfaced after the recent raids.

But if we are serious about law and order of this country, we should not be debating this. Sanatan has a decade old criminal record. Its members were arrested in the Madgaon and Thane blasts. Two were convicted and are currently out on bail. Members of Sanatan are absconders in Dalbholkar-Pansare murder cases. The two arrested in these cases are Sanatan Sadhaks.

The links of Gauri Lankesh murder lead to Sanatan and Ram Sene, as per documents produced by Karnataka ATS. I am not even getting into the harassment in the form of personal threats and defamation cases by these groups.

We need to remember, Sanatan Sanstha is not a religious, spiritual or a political organisation. It is a murderous cult, which wants to establish Hindu Rashtra by eliminating their opponents and critics. Visit the website of Sanatan Sanstha if you believe I am exaggerating. They had put out crossed off photographs of Dabholkar-Pansare on their website before the murders. Their mouthpiece newspaper defames and threatens critics everyday. Recently Kannada and Konkani writers have also been threatened by these goons.

In 2011, Maharashtra ATS had prepared a detailed report on Sanatan terror activities. Then CM Prithviraj Chavan sent it to the UPA government with the recommendation of banning the outfit. The government has changed, but the attitude has not. It would be too much to expect Prime Minister Narendra Modi to act against Sanatan as he had sent his best wishes to Hindu Janjagriti Conference in 2013.

In Goa a MGP leader, who’s partner in Manohar Parikar government, openly supports Sanatan. This protects them from police.  Police officers cite the reason of lack of evidence against Sanatan Santha to charge them with any anti-terrorism law. But who is supposed to collect the evidence?

Maharashtra police and CBI have done little in the last 5 years and are admonished by the HC. Maharashtra FDA had raided Sanatan’s Panvel Ashram and found objectionable drugs. Nothing happened further in this case.

Credit goes to Karnataka police for cracking down on Gauri Lankesh’s case. Maharashtra ATS should thank them for providing clues for the recent raids and arrests. But the investigation in the Kalburgi case has not progressed and the family of deceased intellectual has approached the Supreme Court now.

If government of India can ban SIMI or Zakir Naik ‘s organisations, what stops them from banning Hindutva extremist groups?

Does the organisation enjoy impunity because it is a Hindu group?

We must not forget martyred police officer and former ATS chief Hemant Karkare, who had showed exemplary courage in investigating the Hindutva terror. He had enough evidence in Malegaon-Mecca Masjid and Samjhota Epxpress cases against members connected with RSS and Abhinav Bharat. But these cases were transferred to NIA. For reasons best known to the UPA government, it never fast tracked these cases and under the Modi government, they have since been allegedly weakened.

Public Prosecutor Rohini Salian, in a news paper interview has exposed the political interference in these cases.  The recent arrests of Sanatan and Hindu Janajagriti members have proved once again that Hindutva terror exists. It is as dangerous as Islamic terror. The government should show the will power to prosecute and convict these terrorists. Unless the investigators do not show seriousness in nabbing the masterminds, another assassination or a bomb blast is not far away. 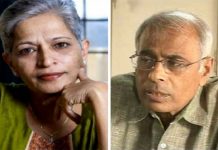