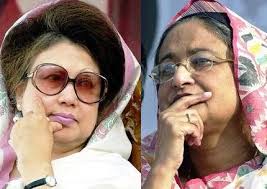 Dhaka, March 27 : A Bangladesh court Wednesday asked why Prime Minister Sheikh Hasina and her predecessor Khaleda Zia can’t be asked to sit for talks to end the ongoing political impasse.

Akond filed the public interest litigation March 14 seeking directives on Hasina and Khaleda, who have refrained from talking to each other since long. They have been asked to reply in four weeks.

According to the court rule, the talks on holding the next parliamentary elections in a free and fair manner can be held inside and outside of parliament.

Since June 2011 when Bangladesh parliament abolished the non-party caretaker government system after an apex court verdict declared the 15-year-old constitutional provision illegal, the BNP-led alliance has been waging mass protests demanding the reinstatement of the provision.

The caretaker system, in which Bangladesh is ruled by a selected government for an interim period (90 days) during transition from one government to another, was initially introduced in 1990 after military strongman H.M. Ershad was deposed.

Khaleda Zia, chairperson of BNP, alleged that prime minister planned an “arranged election” under her government to return to power as its popularity had eroded.

It is widely believed that only Khaleda-Hasina talks can help end the crisis which grill the South Asian nation of about 150 million people and takes heavy tolls on its economy.

Calls for a Hasina-Khaleda dialogue have got louder in the wake of the growing incidents of violence which left nearly 100 people dead since last month.—IANS.