NEW DELHI: In a news which indicates rift in the family, former Union minister and  BJP leader Yashwant Sinha expressed his disapproval on his son’s action of  welcoming and felicitating eight men convicted of lynching a Muslim man in Jharkhand’s Ramgarh.

Yashwant Sinha, who resigned from the party recently, said he did not approve of his son Jayant *Sinha’s action.

“Earlier, I was the Nalayak Baap of a Layak Beta. Now the roles are reversed. That is twitter. I do not approve of my son’s action. But I know even this will lead to further abuse. You can never win,” he said in a tweet on Saturday.

A fast track court in March this year, sentenced the 11 convicts to life imprisonment for lynching a 55-year-old Muslim trader, Alimuddin alias Asgar Ali. However, the Jharkhand High Court on June 29 suspended the life sentence of eight persons and them granted bail.

Expressing happiness over their release from prison, Jayant, a  Minister of State for Civil Aviation in the Modi government on Friday had garlanded them and offered them sweets. 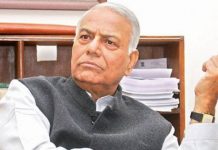 BSP, SP should have included Congress in UP alliance to finish the game: Yashwant Sinha 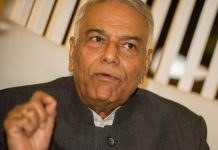 I regret the decision of proposing Modi as PM candidate in 2014 : Yashwant Sinha 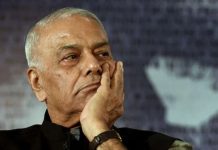 Exit Yashwant: No big deal, yet…