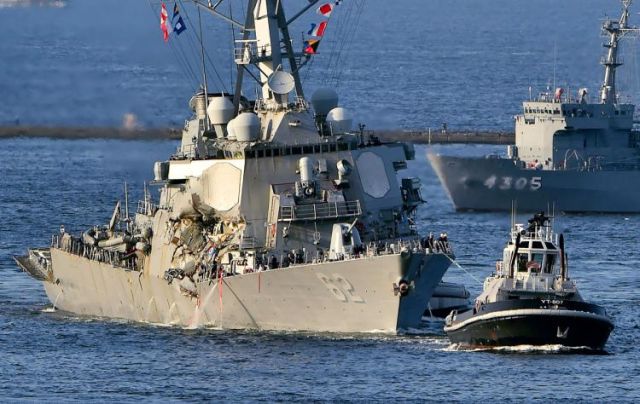 The destroyer collided with the 30,000-ton Liberian oil tanker Alnic MC in the Strait of Malacca at 5.24 a.m. while it was making a routine port visit to Singapore, the US Navy statement said.

The ship sustained damage to its rear-left side. It was, however, not disabled and was motoring to port under its own power, hours after the crash, the New York Post quoted an official as saying.

Search and rescue efforts were on with helicopters and Marine Corps Osprey aircraft from the amphibious assault ship USS America responding, CNN reported.

Singaporean ships and helicopters were also responding, the US Navy said.

“Cindy and I are keeping America’s sailors aboard the USS John S. McCain in our prayers tonight – appreciate the work of search and rescue crews,” Senator John McCain tweeted.

The 505-foot-long ship is named after his father and grandfather, who were both Navy admirals. It entered the service in 1994 and is staffed with 338 people, according to the Navy.

In June, seven sailors were killed when cargo vessel ACX Crystal rammed the USS Fitzgerald off the coast of Japan.