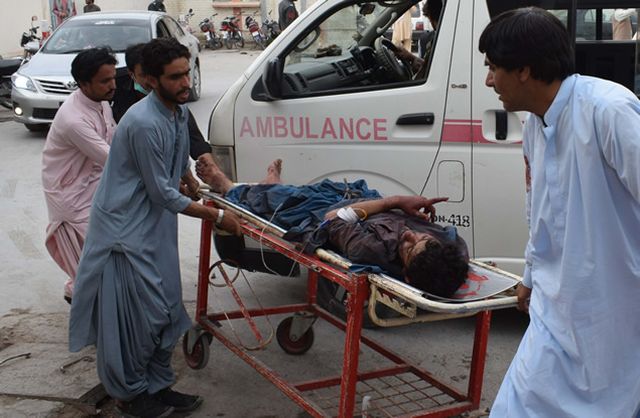 Islamabad : At least 111 people, including Balochistan Awami Party leader Siraj Raisani, were killed and several others injured in a suicide attack in Balochistan on Friday. It was the third such attack on candidates in the run-up to July 25 polls.

Siraj, the younger brother of former Balochistan Chief Minister Aslam Raisani, was attacked during a corner meeting organised for the promotion of his candidature. Siraj’s death was confirmed by his brother Lashkari Raisani.

After the incident, a large contingent of security forces cordoned off the area with the injured shifted to Civil Hospital Quetta, where an emergency was imposed.

In July 2011, Siraj Raisani lost his 14-year-old son in a terrorist attack in Mastung, in which several others, including security personnel, were killed.

Balochistan’s Civil Defence Director Aslam Tareen said 16 to 20 kg of explosives and ball bearings were used in the attack.

Civil Hospital spokesperson Waseem Baig said the hospital received 53 bodies and 73 wounded. At least 20 of those injured were in critical condition.

The Mastung bombing was the latest, and deadliest, of a string of attacks targeting politically exposed persons ahead of the July 25 election.

“The attack is a conspiracy to sabotage the electoral process in the province,” he said in a statement.

Murree ordered the law enforcement agencies to ensure those behind the attack were apprehended.

Earlier on Friday, a blast targeted former Khyber-Pakhtunkhwa Chief Minister Akram Khan Durrani’s convoy in Bannu. While Durrani remained safe, four people were killed and 32 others injured in the attack.

The Election Commission of Pakistan has postponed polling for the constituency from where Siraj was contesting.

Earlier this week, a suicide blast had killed Awami National Party leader Haroon Bilour and 19 others in Peshawar.

The attack was owned up by the Tehreek-e-Taliban Pakistan.

Before that, on July 7, seven people, including a candidate of Muttahida Majlis-e-Amal, were injured when a convoy came under a bomb attack in Bannu.

There was also an attack on PTI candidate’s office in North Waziristan’s Razmak tehsil that had injured 10.