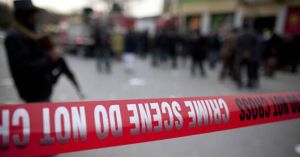 Baghdad, April 15 : At least 13 people were killed and over 150 wounded in a spate of car bomb explosions in Iraqi cities Monday, police said.

In the capital Baghdad, seven car bombs separately ripped through the city during the morning rush hour, killing a total of nine people and wounding some 50 others, an interior ministry official told Xinhua on condition of anonymity.

In northern Iraq, three car bombs separately detonated in the city of Tuz-Khurmato, some 200 km north of Baghdad, killing a total of three people and wounding some 42 others, a police source said.

In Kirkuk, some 250 km north of Baghdad, three car bombs separately went off in the city, killing at least one and wounding 14 people.

Separately, a suicide bomber blew up his explosive vest at a police checkpoint near the city of Dowr, some 150 km north of Baghdad, wounding 13 policemen.

The toll could rise as ambulances and civilian vehicles were evacuating people to different hospital and medical centres in the Iraqi cities.

The attacks came as the Iraqis cities were preparing for the provincial polls slated Saturday to elect their council members.—IANS.