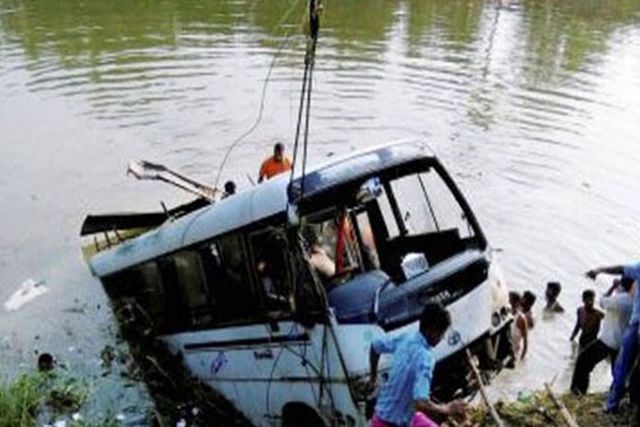 Kolhapur (Maharashtra) : At least 13 persons were killed and three others injured after a minibus fell into a river early on Saturday, an official from Kolhapur Control said.

The accident occurred shortly after midnight when a private Tempo Traveller bus with around 16 passengers of three Pune-based families was proceeding from Ratnagiri to Kolhapur.

The passengers — comprising members of the Kedari, Nagre and Barkhade families — were returning after a thanksgiving pilgrimage to the famed Ganpatipule beach temple in Ratnagiri.

Around 12.50 a.m., when it was speeding along the Shivaji Bridge on the Panchganga River, the driver apparently attempted to overtake a vehicle in front of him.

Just then, another speeding vehicle suddenly came in from the opposite lane, causing him to lose control and the minibus rammed into the stone barriers before plunging into the river, around 100-feet below.

Police and disaster teams were engaged in a massive operation to search and rescue the victims since morning with heavy-duty cranes and dumpers deployed to hoist the bus from the rocky bottom.

After nearly 12 hours of efforts, the bus was finally hauled up by a crane from the stony river-bed as thousands of local villagers rushed to view the operations.

Two more victims’ bodies were extricated from the bus wreck, and the body of an infant was found from the riverbed by the rescuers. The driver of the minibus also died in the accident.

Later, after the autopsies were performed, the bodies were handed to hundreds of grieving relatives who had reached the place by Saturday afternoon, said police official D.N. Ghorpade of Karveer Police Station.

Meanwhile, the Maharashtra government announced a compensation of Rs 500,000 to the next of kin of all the deceased victims from the Chief Minister’s Relief Fund.

The victims of the tragedy are — Santosh Babban Barkhade, 45, his daughter Gauri, 16, and Gyaneshwari, 14, while his wife Manisha, 38, is injured and critical in a local hospital.

The Kedari family bore the brunt of the tragedy which claimed seven family members, including a nine-month-old infant.

They are — Sachin Bharat Kedari, 34, his daughters Neelam, 8, and seven-year-old Sanskruti, and an infant son, nine-month old Sanidhya.

58 pilgrims injured in UP road accident