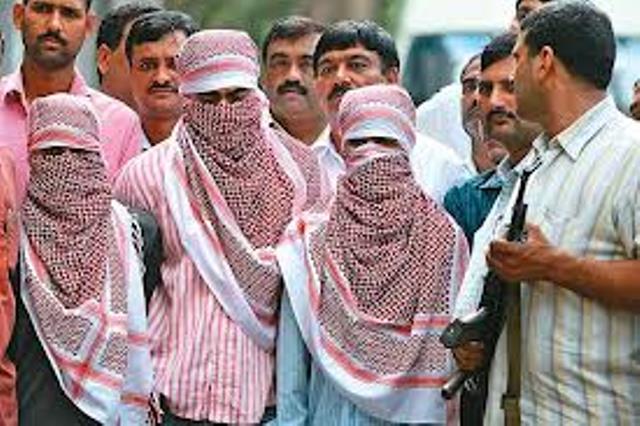 New Delhi : The Delhi Police on Sunday released a sketch of a suspected Hizbul Mujahideen terrorist linked to an alleged foiled fidayeen attack plot. The sketch wore a typical Indian Muslim cap which is now flashing on social networking sites. It reminds me of the Arabic scarves which were being used by Delhi Police earlier when they would present arrested Muslim terror suspects before the media.

Whether they were youths related to Batla House encounter case or the journalist Muhammad Ahmad Kazmi there was one striking similarity in both cases: when they were presented before media by the Delhi Police their faces were covered by typical Arabic Keffiyeh or Ghutrah (scarf) which is worn by Arabs generally or mostly by Palestinian boys when they pelt stones on invading Israeli forces to hide their identity. Normally it’s very difficult to get Arabic Keffiyeh in Delhi as they may be found in the dingy streets of Jama Masjid or Hazrat Nizamuddin only. It seems the Special Cell of Delhi police had already stocked such Keffiyehs to cover the face of their Muslim preys when they produce them before the media to influence the judiciary as well as to make the public believe their side of the story. When a Delhi court a few years back rebuffed Delhi Police for using Arabic scarves for terror suspects the Delhi Police has since started using typical Muslim prayer cap.

The Sunday sketch of the alleged absconding terrorist, however, has a surprising element ignored by the media. The Delhi Police while releasing the sketch yesterday said they prepared it on the basis of the CCTV footage and the description given by the hotel staff. The TV channels aired the sketch side by side the still image of the CCTV footage of the terror suspect. But just have a bird’s glimpse at the CCTV image and the sketch you can find out another hole in the story of the police about the Holi terror plot. The CCTV image shows the suspect wearing a Nike cap while the sketch of the suspect is wearing a typical Muslim prayer cap. This is how a blind mind ignores the visible. 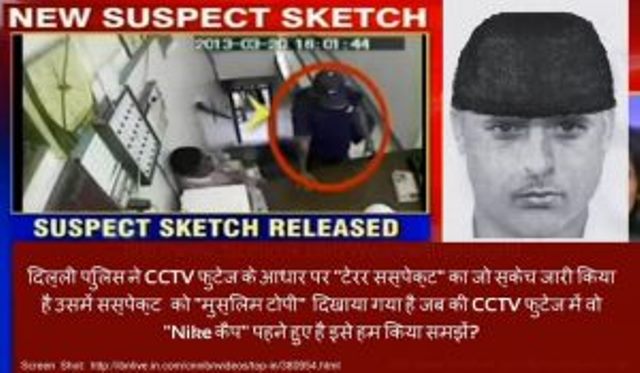 Moreover, the shadow of doubt is also falling on Nike cap itself. According to the police, the sketch is of the person who checked into the hotel of Old Delhi and left there an AK-56 and ammunition allegedly for Syed Liyaqat Shah. The CCTV shows the suspect wearing the Nike cap. It is very interesting that arrested Liyaqat Shah was also shown wearing similar Nike cap before the media. It seems there was a deliberate attempt to link Shah with the alleged missing suspect.

Meanwhile, however, the J&K police and government have refuted all claims of the Delhi Police about Syed Liyaqat Shah, and following claims of his family and exposures by English media, the central government today ordered an NIA probe into Shah’s arrest.