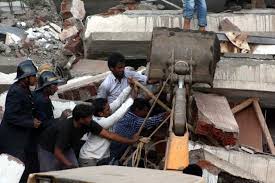 Thane, April 7 : All nine men arrested for the collapse of a seven-storey building in Thane that killed 74 people were sent to 14 days police custody Sunday even as 37 of the injured remained in hospitals.

A former assistant municipal commissioner, identified as only Thorbole, was also nabbed Sunday.

Police said a search of Chavan’s house led to the recovery of Rs.5 lakh in cash and some incriminating documents.

All the arrested have been charged with culpable homicide not amounting to murder.

“As soon as the floors were ready, they immediately handed them over to the buyers. Once people occupied the building, it became very difficult for the officials concerned to remove them and take action on the illegal construction,” he said.

Raghuvanshi called the Thursday tragedy “a colossal one”. “We shall not spare anybody, whether they are government servants, officials or civilians,” he said.

Meanwhile, 37 people continued to be under treatment in various hospitals in Kalyan, Thane, Kalwe (a suburb of Thane) and Mumbai.

The condition of 12 victims, who suffered grievous head and chest injuries, was said to be “serious” by Thane police.

On Sunday, a four-year-old miracle survivor of the Daighar building crash finally opened her eyes and cried, much to the relief of surviving relatives and siblings.

Sandhya Thakur had been unable to open her eyes, swollen with dust and due to psychological trauma. She spent several hours under the debris before rescuers dug her out.

The child lost her mother Kiran in the tragedy while her father and siblings are still missing. Doctors said her vision was unharmed.

A total of 74 people died in the crash, making it the worst-ever building collapse in Maharashtra in the past decade. Rescue operations were called off Saturday.

A daily labourer from Thane, Joselyn Soares-Miranda, took Sandhya under his care, consoling and feeding her as efforts continued to trace her relatives.

Joselyn, in his mid-50s, rushed to Kalwe hospital when he heard about Sandhya’s plight.

On Friday, Maharashtra Chief Minister Prithviraj Chavan ordered a probe into the tragedy, to be conducted by an additional chief secretary of the urban development department.—IANS.