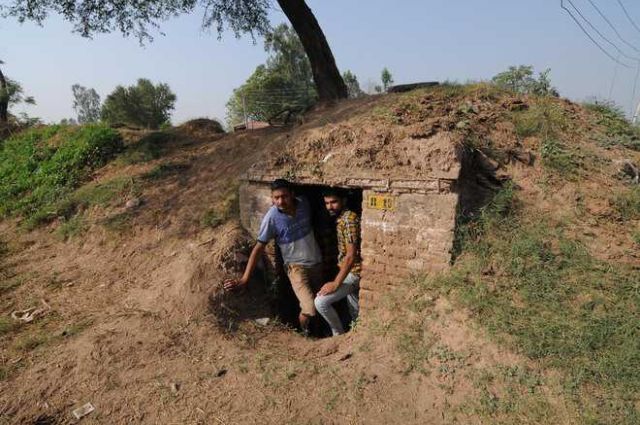 Jammu : Nearly 14,500 safety bunkers will be constructed in Jammu and Kashmir border areas for people to take shelter in the event of Pakistani shelling of civilian areas on this side, Home Minister Rajnath Singh said on Friday, capping his two-day trip to the state.

The Home Minister said the government would raise seven more India Reserve Battalions of special armed police in the state.

He announced increase in financial compensation to Rs 5 lakh from Rs 1 lakh for persons killed during cross-border firing on the International Boundary and the Line of Control. The amount will be directly credited to the account of next of kin. This removes the condition of a fixed deposit account to receive the financial assistance.

The minister said the government has also decided to increase to Rs 50,000 from Rs 30,000 the compensation for each animal killed during the border firing.

The Home Minister said the government was concerned over the safety of people living in border areas as Pakistani forces continue unprovoked firing and shelling to target Indian areas.

For this, he said, Rs 450 crore was sanctioned. The minister said five bullet-proof ambulances would also be stationed permanently on the border areas to tackle emergency situations.

He said five IR battalions would be raised with 60 per cent reservation for border residents. There will be two more women battalions — one each for Jammu and the valley. This, besides boosting security, will also give direct employment to nearly 7,000 young men and women in the state.

Two of the battalions, the minister said, would be deployed to guard villages falling between 0-10 km from forward posts.

The minister also announced financial assistance of Rs 5.5 lakh per family for west Pakistani refugees settled in the state since 1947. The decision will benefit nearly 5,764 families who have no citizenship and voting rights in Jammu and Kashmir.

These refugees cannot apply for state government jobs and vote in Assembly elections. But they are eligible to vote in parliamentary polls.

Rajnath Singh said the government had decided to increase to Rs 13,000 from 10,000 the monthly financial assistance for each Kashmiri migrant family living in Jammu and other parts of the country.

“Once I reach Delhi, an order will be issued regarding the financial assistance to west Pakistan refugees settled in Jammu and Kashmir and the (Kashmiri) migrants,” he said.

Rajnath Singh flew back to Delhi in the evening ending the visit to the state to assess the security situation in the aftermath of the ongoing Ramadan ceasefire.

Amid speculations that the ceasefire would be extended beyond the Muslim month of fasting, Rajnath Singh said any decision regarding that would be taken only after taking a holistic view of the security scenario in the state.