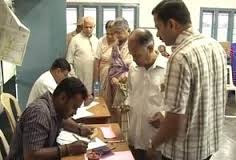 Bangalore, May 5: Over 65 percent of the 43.6 million voters cast their ballots Sunday in the 14th Karnataka assembly election Sunday, an official said here.

“More than 65 percent voting has taken place and the percentage could go up once full details are in,” a spokesperson for the state election authorities told reporters soon after polling closed at 6 p.m.

Bangalore, which has earned notoriety for low polling, lagged behind most of the other districts in vote percentage with only about 55 percent of the seven million voters exercising their franchise, the official said.

“The polling was peaceful though there have been minor incidents protests in some places over missing names or malfunctioning electronic voting machines or heated exchange of words among supporters of various contestants,” a Karnataka police spokesperson told reporters in Bangalore.

Election officials said people had stayed away from voting in a few villages in north Karnataka protesting against lack of basic facilities like drinking water.

The polling began on a brisk note, despite hot weather conditions across the state. The votes will be counted May 8.

With the Election Commission advancing commencement of polling by an hour to 7 a.m., hundreds of voters made a beeline to booths in many of the 223 assembly constituencies to cast their vote.

But in the first four hours of voting, polling was just about 15 percent.

The EC had also extended the duration of polling by an hour to 6 p.m., in view of the scorching summer heat across the state, including Bangalore.

Polling was held for 223 of the state assembly’s 224 elected seats. Election from the Periyapatna constituency of Mysore district has been countermanded, following the death of ruling Bharatiya Janata Party candidate Sannamoge Gowda April 29. Polling there has now been rescheduled for May 28.

As the state capital, Bangalore had the largest number of voters — 7.03 million of a total population of 10 million — and the highest number of assembly segments at 28.

Among the eligible voters, 534,548 were first-timers, as they enrolled for this election in January.

About 253,000 officials from state and central governments and state-run organisations were on poll duty, with 48,182 police personnel outside booths and about 100,000 additional forces deployed around booths to maintain law and order.

About 2,000 flying squads comprising five members each, including a photographer and a video-grapher to record the proceedings and ensure free and fair voting, a poll official said.

The total number of candidates in the fray are 2,948, including 170 women candidates.

Major political parties such as the ruling BJP, the Congress, the Janata Dal-Secular (JD-S) and the newly-formed Karnataka Janata Party (KJP), a party of the BJP rebels led by its first chief minister in the southern state B.S. Yeddyurappa are contesting in all the 223 constituencies across the state.—IANS.