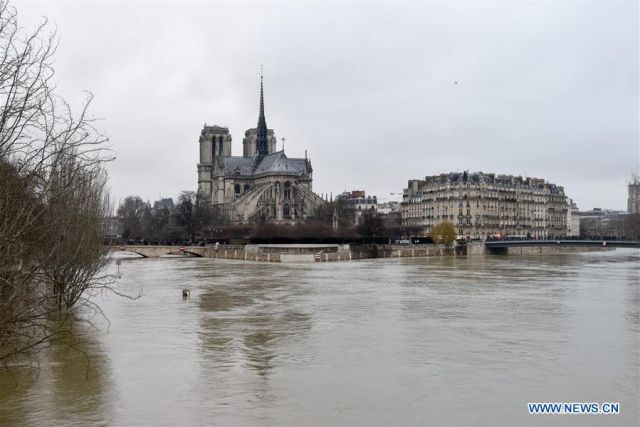 Paris : The Seine river, which runs through Paris, kept rising on Sunday and led to the evacuation of about 1,500 people, police said.

Water level remained at a high level in the Paris region where 240 communes remained on alert of flooding.

About 1,500 citizens were called to leave their homes in Ile-de-France region including the French capital and surrounding zones, Xinhua quoted Michel Delpuech, chief of the Paris police body, as saying.

“The waters will only go away slowly,” Delpuech said, stressing that “everyone knows what he must do.”

“A maximum level, slightly lower than that reached during the flood of June 2016, is expected,” government-run agency vigicrues predicted.

In 2016, torrential rains had triggered heavy flooding, plunging parts of France’s central regions and Paris’ vibrant venues into chaos where the Seine rose to 6.1 meters. Six people had been reported dead due to floods.

A non-stop rainfall caused flooding notably in the Paris region where high water level submerged the river’s walkways and forced the Louvre museum to close the lower level of the Department of Islamic Art to the public till January 29.

The rail operator SNCF also closed the RER C commuter line that runs along the river and is used by tourists to reach the Eiffel Tower, Notre-Dame Cathedral and Versailles.