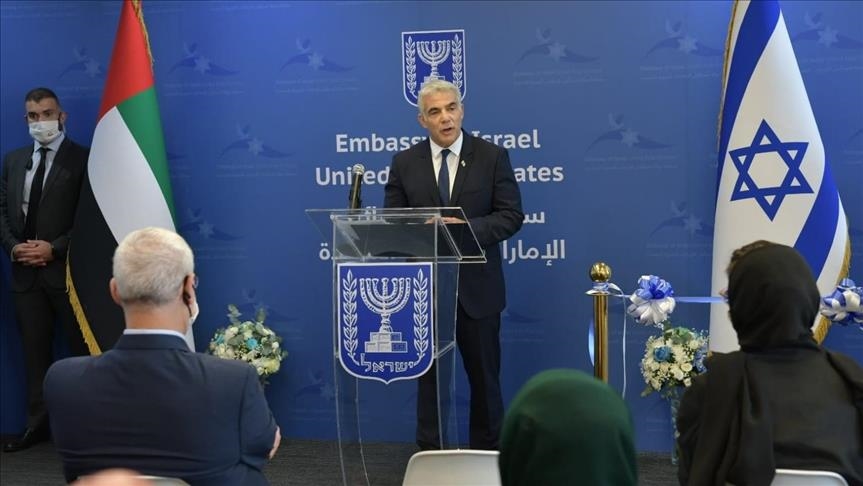 On his first official visit to the Gulf state since last year’s controversial normalization agreement between the two countries, Yair Lapid attended the embassy’s opening ceremony.

Afterward, Lapid thanked Benyamin Netanyahu, the longtime prime minister who lost his post earlier this month, calling him the architect of the normalization agreement between the UAE and Israel.

Describing the embassy’s inauguration as a historic moment, Lapid said: “Agreements are signed by leaders, but peace is made by people. What we are doing here today is not the end of the process, but it’s the beginning.”

Israel wants peace with all its neighbors, he added.

The UAE’s Culture and Youth Minister Noura Muhammed al-Kaabi was also present at the ceremony.

During his two-day visit, Lapid will meet his UAE counterpart Abdullah bin Zayed al-Nahyan to sign an economic cooperation agreement, and also inaugurate a consulate in Dubai, according to the Israeli Broadcasting Corporation.

Last September, the UAE, and Israel signed a controversial US-sponsored deal to normalize their relations. Since then, the two countries have signed dozens of bilateral agreements in various fields, including investment, banking services, and tourism.

Palestinian groups have denounced the deal and similar ones with other Arab states, saying they do not serve the Palestinian cause and ignore the rights of Palestinians.-AA