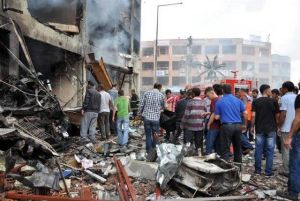 The initial information indicated that the blast was staged by a booby-trapped car that ripped through an intersection between al-Khidr Street and al-Soyouf Square, Xinhua reported.

The blast came just an hour after a powerful explosion was heard in the capital’s main Palestinian camp, al-Yarmouk, which is witnessing intense battles between the al-Qaeda-linked Nusra Front and pro-government armed Palestinian committees.—IANS.