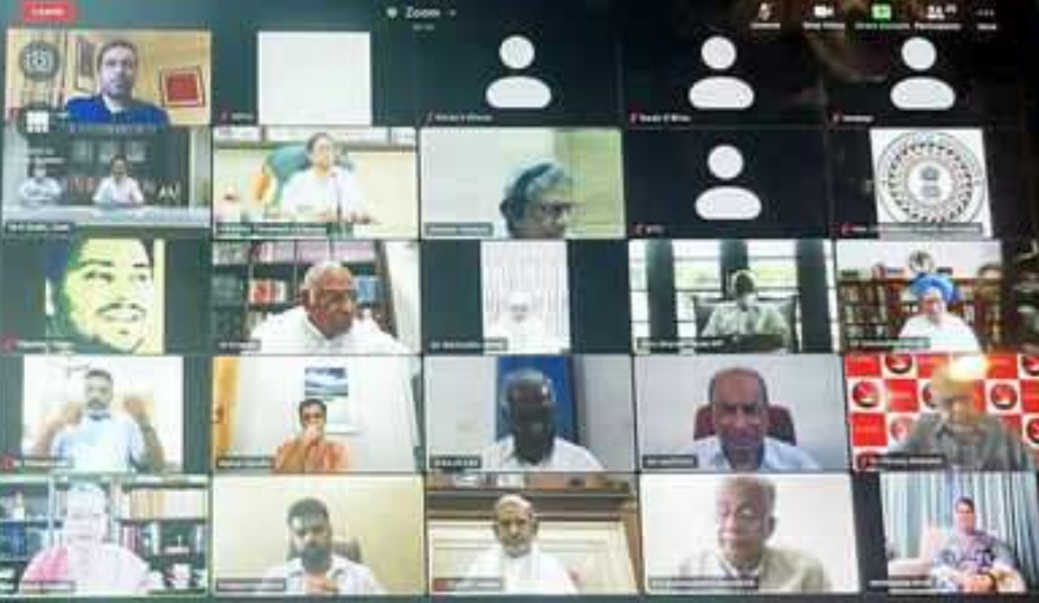 New Delhi: Leaders of 19 Opposition Parties on Friday strongly demanded to release all political prisoners, including those under draconian UAPA in Bhima Koregaon case and anti-CAA protests and stop using other draconian laws like sedition/NSA to violate democratic rights and civil liberties of the people. After an online meeting chaired by Congress president Sonia Gandhi, they issued a joint statement with a 11-point charter of demands saying if these are not met, they will jointly organize protest actions all over the country from 20th to 30th September 2021.

The statement did talk about the attacks on dalits, tribals and women but it did not utter a single about the continuing attacks on minorities especially Muslims and Christians. One can get an impression from the statement that all is well with these minority religious groups under the present regime or the so-called secular parties have closed their  eyes from sufferings of minorities  who have been under  violent attacks from the Hindutva groups.  Interestingly, most of the parities are dependent on Muslim support but none of them even are willing to just mention the problems faced by the largest minority community since the advent of fascist forces. In the list of 19 parties, Muslim-led parties such IUML, National Conference and AIUDF are there but it seem that they also failed to use their influence in this regard.

While  strongly  denouncing the manner in which the Union  government and the ruling party disrupted the monsoon session of Parliament, refusing to discuss or answer the illegal usage of Pegasus military spyware to conduct unauthorized surveillance, repeal of the three anti-farmer laws, gross mismanagement of Covid-19 pandemic, runaway inflation & price rise as also spiraling unemployment,  leaders called upon “the people of India  to rise to the occasion to defend our secular, democratic Republican order with all our might”.

On Jammu and Kashmir, they urged the Modi government to restore full statehood including J&K cadre of central services and to conduct free and fair election at the earliest and also release all political prisoners in J&K.   It is to be noted that most of the opposition parties have been maintaining their cryptic silence over unilateral abrogation of the Article 370 by the Modi Government on August 5, 2019 which had granted special status to the erstwhile state of J&K.

In her opening remarks at the meeting of the opposition leaders, Congress President, Sonia Gandhi  said the recent Monsoon session of Parliament was a complete washout again entirely due to the Government’s ‘obstinate and arrogant’ unwillingness to discuss and debate urgent issues of public importance.

She said, however, the session was marked by the determined unity that all Opposition parties demonstrated for over twenty days in both the houses.

In recent months we have issued two public statements jointly on various national issues of common concern, she recalled and adding that some of you also have taken up matters of public importance with the Prime Minister directly.

And on behalf of the Congress Party, I have also written to the Prime Minister on many occasions to highlight the need for urgent measures such as direct cash support, especially to those whose livelihoods have been badly affected, she said.

These include the Pegasus snooping scandal that affects each and every citizen, the repeal of the three anti-farmer laws- the agitation of farmers that has been going on for the past nine months, the price rise of essential commodities and the continuing assault on federalism and the institutions of our democracy.

She also emphasized that the opposition parties’ ultimate goal is the 2024 Lok Sabha elections for which “we have to begin to plan systematically with the single-minded objective of giving to our country a government that believes in the values of the Freedom Movement and in the principles and provisions of our Constitution”.

Referring to the collective efforts of the Opposition in passing the Constitutional Amendment to restore the long-standing rights of states to identify and notify OBCs, she said the 2024 election is a challenge, but together we can and must rise to it because there is simply no alternative to working cohesively together”.

The joint statement notes that:

*Parliament witnessed unprecedented scenes where MPs, including women MPs, were injured by Marshalls deployed to disrupt Opposition protests.  Apart from denying the Opposition their right to raise crucial issues concerning the country and the people, the government steamrolled legislation through the din of the disruption caused by its handling of both Houses of Parliament.

*The Prime Minister, in his Independence Day address, did not focus on a single-issue concerning people’s miseries. The speech was full of rhetoric, empty slogans and disinformation. In fact, it was a repackaging of earlier speeches given in 2019 and 2020.  This speech is an ominous warning that lives of our people will continue to be ruined further.

*The massive mismanagement in handling the Covid-19 pandemic has resulted in imposing severe pain on a large number of people, particularly families who have lost their beloved members.  The instances of under-reporting, both the number of infections and the deaths, have been noted by many International and National agencies, who estimate that the actual figures are at least five times more than what is being officially stated.

* The destruction of the Indian economy, with deepening recession, is pushing crores of our people into joblessness, escalating the levels of poverty and hunger.  The run-away inflation & price rise is adding to people’s woes and destroying livelihoods.

*The historic struggle by our farmers continues into the ninth month now, with the government being obdurate in not repealing the three anti-farmer Laws and compulsorily guaranteeing & giving MSP to the farmers.  We, the undersigned, reiterate our support to the struggle launched by the farmers under the banner of the Samyukta Kisan Morcha.

*The procuring of the Pegasus Military Spyware for surveillance of people by the Government of India is extremely alarming.  The government refuses to answer one straight question – Has it, or any of its agencies purchased the Pegasus Spyware from the Israeli firm – NSO, known for cyber military surveillance? The government must answer and come clean.  Such surveillance is not only a gross violation of people’s fundamental right to privacy but is an attack on Indian democracy and democratic institutions.  The list of those under surveillance include political leaders, journalists, a former Supreme Court Judge and officers of the judiciary, a former Prime Minister, a former CBI Chief, a former Election Commissioner, two former Chief Ministers and others.  This is ominous.  Global media exposures show that such surveillance was rampant in 2019 on the eve of the general elections to Parliament. Apart from individuals, this is an attack on institutions that act as vital checks and balances in a democracy and discharge their Constitutional responsibilities.

* Loot of National  Assets:  The destruction of the economy is accompanied by a mega loot of our National assets; large-scale privatization of the Public Sector, including banks and financial services; the privatization of our mineral resources and public utilities to benefit the cronies of the Prime Minister.  This will be strongly resisted.

*The attacks on dalits, tribals and women have multiplied exponentially.  This completely negates the Constitutional imperative of moving towards social justice in the country.

*Neither the Parliament could discuss any of these issues nor did the Prime Minister in his address on 15th August provide any solution to mitigate the worsening conditions of the people, their lives and livelihoods.

Leaders said under these circumstances, they demand from the Union Government the following:-

1-The Union Government must implement free cash transfers of Rs.7, 500 per month to all families outside the income tax bracket.

4-Stop and reverse the unbridled privatisation of the public sector; repeal the labour codes which dilute the rights of the labour and the working class.

5-Hold immediate Supreme Court monitored judicial enquiry into the use of Pegasus Spyware for surveillance of High level investigation into the Rafale deal – the cancellation of the earlier order and placing of a new order at higher cost.

6-Release all political prisoners, including those under draconian UAPA in Bhima Koregaon case and anti-CAA protests. Stop using other draconian laws like sedition/NSA to violate democratic rights and civil liberties of the people.  Release all media personnel detained for exercising their fundamental right of freedom of expression.  And

And (7)  Release all political prisoners in J&K. Restore full statehood including J&K cadre of central services. Conduct free and fair elections at the earliest.