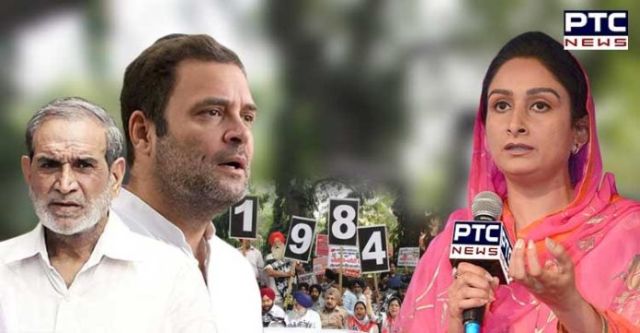 Chandigarh : Union Food Processing Minister Harsimrat Kaur Badal on Monday demanded that action be taken against the Gandhis, alleging that the family extended political patronage to the perpetrators of the 1984 Sikh massacres.

Harsimrat Badal told mediapersons here that, as enumerated by the Delhi High Court while convicting Gandhi family loyalist Sajjan Kumar in a case of mass murder, Congress president Rahul Gandhi should tell why he lied that the Congress was not involved in the genocide.

Addressing the media along with senior Shiromani Akali Dal (SAD) leaders Bikram Singh Majithia and Daljit Singh Cheema following the Delhi High Court judgement against Sajjan Kumar, the Union Minister said it was made possible due to Prime Minister Narendra Modi’s decision to reopen old cases which had been closed by the Congress and the constitution of a SIT (special investigation team) to investigate them afresh.

Stating that not only Sajjan Kumar, but the entire Congress party had been placed in the dock due to the verdict, Harsimrat Badal said, “Now the courts have also made it clear that justice was denied to the 1984 victims due to political patronage. Action should now be taken against UPA chairperson Sonia Gandhi who should be questioned about her role as accomplice of former Prime Minister Rajiv Gandhi in the 1984 massacres.”

“Similarly, Rahul Gandhi should also tell the people why he lied some months ago that the Congress party did not have any role in the 1984 genocide,” she added.

Asserting that Monday’s verdict against Sajjan Kumar has given hope to the victims, Harsimrat Badal said, “I am hopeful that Jagdish Tytler and Kamal Nath will also meet the same fate soon.”

She condemned the Congress for continuing to patronise Kamal Nath by making him the Chief Minister of Madhya Pradesh. She also thanked the Delhi High Court for the “historic verdict” saying people’s faith in the judicial process had been further strengthened.

“The SAD raised this issue with PM Narendra Modi in 2014 and formed the SIT which reopened old cases leading to the conviction of two accused, Naresh Yadav and Yashpal, in one of the 1984 cases,” she pointed out.

Asserting that she had seen the 1984 tragedy up close and was lucky to survive unscathed, Harsimrat Badal said she could understand the grief of the widows who were waiting for justice, 34 years after the tragedy.

“I have worked in the refugee camps as a young girl trying to reunite families torn apart by the tragedy. I even chose to speak on this issue during my maiden speech in Parliament,” she said.

Majithia said it was unfortunate that Sajjan Kumar was defended in court by Amit Sibal, the son of senior Congressman Kapil Sibal.

“This apparently can happen only due to personal intervention of the Gandhi family, Majithia, who is the younger brother of Harsimrat Badal, said.

Akali Dal leader Cheema said that since the court had made an observation that the Congress party is patronising the accused, the Election Commission should de-recognize the party immediately.